We all have one (at least) of those books: a book that you had to read in school and weren’t that into, but is hailed throughout the English-speaking world as a masterpiece; a book that you wouldn’t read again because it’s now so fraught with memories and expectations. For me, that book was Pride and Prejudice, by Jane Austen. It was assigned summer reading, and I waited until the last minute and ended up reading it at my grandfather’s funeral in Kansas (well, not the actual funeral, clearly). Since then, I’ve only met people who hated it – all my friends, somehow – or who loved it with a passion so girly it scared me. Could I approach a re-read with anything less than dread? Was it worth another read? 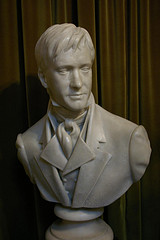 For years, the answer was no. Neil Gaiman always had something new out, or Nancy Pearl had recommended something interesting. And then I fell in love with the English actor Matthew Macfadyen, terrific in the first two seasons of MI-5, and most recently in Little Dorrit. I had to watch everything he had been in, and on that list was the 2005 adaptation of Pride and Prejudice, also starring Keira Knightly. After watching the movie, I went back to the book… AND LOVED IT! So what was it about the movie that made the book pop?

First, there was humor! I had no idea Mr. Collins was supposed to be so pompous and over the top, but the scenes with him were hilarious. People had told me Jane Austen had a sly wit, but I never picked up on it; when I went back to the book, I had the actors’ intonations in mind and those parts jumped to life.

I also never really understood the big deal about the supposed social differences between Elizabeth Bennett and Mr. Darcy. The Bennett’s have land, animals, and servants – so what’s the big deal? Who cares if they have a two person carriage and someone else has a four seater? But then when you see Mr. Darcy’s mansion in the movie, it’s hard not to guffaw and be a little shell-shocked right along with Lizzie.

And finally, those endlessly described parties are, shockingly, so much fun! Watching the dancing and the laughing, I understood at last why they have such pride of place in Austen’s books – I want to go to one too!

That’s my own personal Jane Austen redemption story. I now love Pride and Prejudice, and was also able to repeat this whole cycle with the Masterpiece Classic adaptation of Austen’s Persuasion (Anthony Stewart Head, aka Giles from Buffy the Vampire, is hilarious in a small role as the father). How about you? Has a movie ever actually made you want to read the book next?

4 thoughts on “The movie made me love the book: Jane Austen”