The neighborhood is alive with gardeners mowing lawns,
and trimming hedges,
the mechanized hiss of twirling sprinklers
and for those just joining us,
it’s a beautiful day and Hailey is dead and I have nothing to do,
nowhere to be. ~ How to Talk to a Widower

From 1960s TV sitcoms such as the Andy Griffith Show and The Courtship of Eddie’s Father we have seen the widower portrayed, but what about the modern widower’s story? How does one truly handle the loss when the setting isn’t picture perfect Mayberry?

After the death of his wife, Joe Warr, played by Clive Owen, has to step back from his career as a traveling sportwriter and come to terms with not only the tragic loss of his wife, but the raising of their six-year-old son without a mother. When his teenage son from a previous marriage joins the mix, it is an experiment of raising sons without female influence. With his “just say yes” philosophy — which includes water balloon fights indoors, riding on the hood of the car and jumping into bathtubs — the standards of parenting are stretched and altered. In the movie The Boys Are Back, which is based on the memoir The Boys are Back in Town by Joe Carr, life may be chaotic and messy with multiple bruises to shins and egos as these three men wander down the road to growing up together and overcoming tragedy.

widower Doug Parker who is reeling from the tragic loss of his wife, Hailey, in a plane crash. Suffering from casserole overdose and depression, Doug feels his failures mounting. What is he to do about his teenage step-son Russ who gets into more trouble every day at school, his sister Claire moving in to sort out Doug’s life rather than concentrate on her tumultuous marriage, and his ex-best friend marrying his little sister after falling in love at Hailey’s funeral? With humor and heartbreak, Doug finds that you don’t have to have the answers to start again. 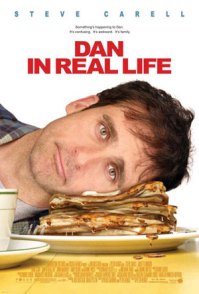 In Dan in Real Life, popular parenting advice columnist and widower Dan Burns, played by Steve Carell, is off with his three daughters to his family’s annual get together in Rhode Island. Heading into town for some alone time he meets the beautiful Marie, played by Juliette Binoche, in the local bookstore. Both become captivated with one another over coffee and conversation. Once they depart Dan is on cloud nine until he arrives back to his family’s cabin and meets his brother’s new girlfriend … Marie. Although they try to hide their feelings, it just leads to humorous and sometimes heartbreaking interactions. Now it’s time for the one man who gives advice to read his own column.