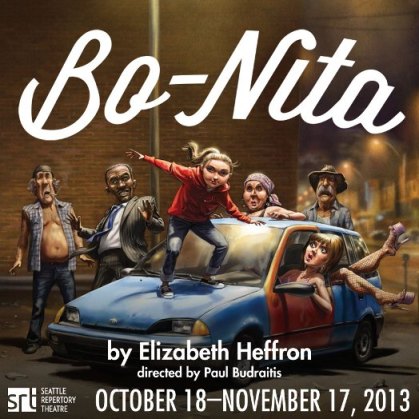 We’re excited about the Seattle Repertory Theatre’s production of local playwright Elizabeth Heffron’s “Bo-Nita,” opening later this week. Life’s not easy for Bo-Nita. It never is for a 13-year-old, but especially one who winds up with a dead, semi-ex-stepfather on her bedroom floor. With humor, pathos, and a dash of Midwest magic realism, “Bo-Nita” follows the resourceful exploits of a working class mother-daughter duo determined to stay together—and out of jail. The play will run October 18 to November 17, 2013.

We’ve selected a few books, DVDs and CDs to complement this coming-of-age story. Here are a few:

In Zanesville by JoAnn Beard
A 14-year-old girl comes into her own in a small Illinois town, as she juggles fragile friendships, the trials of high school, her father’s drinking and her mother’s depression in this novel full of voice.

The Love Curse of the Rumbaughs by Jack Gantos
With black humor similar to that of BO-NITA, this young adult novel explores themes of free will, cloning and the nature of extreme mother love.

Cavedweller by Dorothy Allison
Like BO-NITA this novel explores the effects of substance abuse on a family. It centers on a mother who must make amends to her daughters after falling in love with a violent man.

When you think of the quintessential coming-of-age television series, surely Freaks and Geeks comes to mind. Rewatch or watch for the first time; either way, you’re in for a treat.

The Sunset Tree by The Mountain Goats
In this autobiographical album, John Darnielle sings from the point of view of a child powerless to stop the domestic violence in his home.

Here’s our complete list for Seattle Rep’s ‘Bo-Nita’: Beyond the theatre.