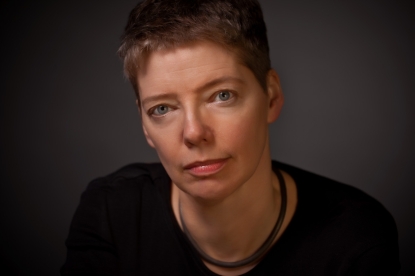 Nicola Griffith will be reading from her new historical novel, Hild, at the Central Library on December 10 at 7 p.m. Hild is set in 7th century Britain and follows the life of the young seer, St. Hilda of Whitby. Seattle author Nicola Griffith, originally of Yorkshire, England, has received several awards for her writing that include the Nebula, Lambda and James Tiptree, Jr. Awards. Her previous works include Ammonite, Slow River and the Aud Torvingen crime novels. She was kind enough to share some recent reads with us:

While I’m working on a novel I find it difficult to read fiction. In the last two months, though, I’ve been able to plunge giddily into others’ fiction. Here’s a selection of recent reads–most of it happily nothing like my own work. One thing they do all have in common: the ability to immerse the reader, to put us right there, right then, with great authority.

The Silver Mistress, by Peter O’Donnell. This is the one Modesty Blaise book I hadn’t read. I found it on eBay and it arrived just before I got married. I took it on my honeymoon. Fabulous! Good old-fashioned James-Bondish action fiction in which the woman always wins. O’Donnell is so good at creating a particular mindset that you forget his premise is utterly ridiculous.

We Are All Completely Beside Ourselves, by Karen Joy Fowler. Contemporary fiction at its finest. I’ve read all Fowler’s short fiction, and many of her novels, but this one, I think, hits the sweet spot: a luscious examination of science, family, and the cost (to people and other animals) of experimentation.

The Return, by Michael Gruber. I discovered Gruber when reading for the Hammett Award and was instantly bewitched by Tropic of Night, the first of his three books about Paz, a detective and chef in Florida who discovers that some magic is real. This one has nothing supernatural (or does it?), but it’s still strange-with-a-hint-of-tropical in inimitable Gruber style.

The Daylight Gate, Jeanette Winterson. This story of the seventeenth century witch trials in northern England is set in a wonderfully evoked Cumbria, a landscape Winterson grew up with. She really knows how the sky looks, how the wind over the fells cuts when it whistles through the gap in a stone wall. She isn’t afraid to face pain and hardship; this is one time I was glad I was reading a novella and not a full novel.

The Lantern Bearers, Rosemary Sutcliff. This is a reread because if I don’t read a Rosemary Sutcliff novel in any given year I feel bereft. Sutcliff is the writer who showed me most about the use of nature in fiction. She captures Late Antiquity (the end of Roman rule in Britain) as much through use of landscape and birdsong as plot–though her plots rattle right along, with Aquila, our protagonist, going from young Roman soldier to brutalized slave to freedom fighter to married man. A rich mix of young adult and thoroughly grown-up themes.

Check out Nicola Griffith’s blog for more of her writing, reading and research.