“I’ve been single for a while and I have to say it’s going very well.
Like…it’s working out. I think I’m the one.” – Emily Heller

After a ten year hiatus from the dating world, I finally started playing the game of dating two years ago and I got asked out for the first time by a human male when I was twenty-nine years old.

Before that historic day I did the online dating bit for a while, met nice people, but nothing continued on. The first person I ever dated was a when I was fourteen, I asked out the boy next door in a letter, and for about five years we dated until that inevitable teenage heartbreak.

I used to say I had mastered the art of being single, I still take pride in my hiatus, but being out there now, truly living this life of mine I find I don’t mind the heartbreak as much as I thought I would.

I’m still figuring it all out, taking chances, but still holding on to myself; here are a few items in our collection that made me confident that my dating or lack of dating wasn’t so very odd after all.

The Curse of the Singles Table: A True Story of 1001 Nights Without Sex by Suzanne Schlosberg

I found Suzanne’s story humorous in such a real way. As a professional woman it’s still a shock to some to be single and without kids, especially those of us over thirty. Although the lack of sex life was definitely more secondary to the book, finding yourself and happiness in singledom was center stage. Most of us still want a bit of that fairytale, but being solid in who we are is the best foundation to making any dream come true, single or not. 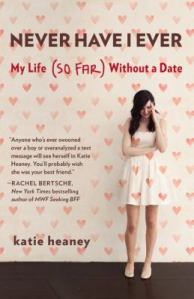 Never Have I Ever: My Life (So Far) Without a Date by Katie Heaney

Sweet, funny, and honest, Katie walks us through her dating misadventures. She also focuses on her amazing friends, who at times can be some of our greatest love stories. It’s an empowering story where society’s expectations don’t matter, about how we feel about ourselves as single women. While maybe we don’t fit in the box, at least we aren’t afraid of what’s outside – and that can be our greatest power.

It’s Not You: 27 (Wrong) Reasons You’re Single by Sara Eckel

There is nothing wrong with being single and with insight and wisdom Sara confirms that very fact. When we take the time to enjoy our singleness instead of trying to figure out why we are single or why society feels compelled to comment on our singleness, we can reach a healthy level of acceptance and embrace life in a much more welcoming way. We as single women aren’t lacking, we are enough.