There are few authors in literature who are more prolific than Nora Roberts. With over 200 books to her name in 33 years of writing, she’s the undisputed queen of the contemporary romance novel. While people may want to write her off because she writes romances, the work she’s done in the genre has revolutionized it, bringing the love story from the traditional virgin-meets-alpha-male formula, told predominately from her point of view, to a more contemporary and realistic relationship between adults, with the story told equally from both the man and woman’s point of view. If that wasn’t enough, almost forty of those novels are in her In Death series, following a married couple as they solve crimes in 2058 New York City.

To pick up a Nora Roberts book can be intimidating—what’s good? What’s bad? Do you start with a trilogy? A stand-alone novel? Hopefully this post will give you some ideas of where you might want to start.

In an informal Facebook poll of my friends, the Roberts books most frequently cited as favorites were, hands-down, the Chesapeake Bay Saga quartet. Set in a small coastal Maryland town, the books are based around four foster brothers, coming to terms with their rough childhoods and how they are affected by them as adults. Roberts’ love for the sea and the land is obvious, as the setting is almost a character unto itself. The characters from the books weave in and out of each other’s stories, so while a book may focus on one brother, the other brothers still develop as characters within it. It’s somewhat unorthodox, but I suggest starting with the second book, Rising Tides, about a boat-builder and his unrequited love for a longtime friend.

If you aren’t ready for a quartet, Roberts has written dozens of stand-alone novels. Montana Sky was the first of these novels to reach the best-sellers list. When a Montana rancher dies, he leaves his spread to his three daughters, one from each failed marriage, all of whom have never met each other. They must live together for a year in order to inherit the multi-million-dollar ranch. In doing so, they fall in love, both with the land and the men who work it.

Another way to enter her bibliography is by setting. Two of her stand-alone books are set in Washington, a familiar landscape to most of us. River’s End, on the Olympic Peninsula, follows Olivia MacBride, the daughter of a gruesomely murdered movie star, as she lives in seclusion with her grandparents at the lodge they run. Her testimony convicted her father of her mother’s murder, and she must face her childhood trauma when a man familiar with the case resurfaces as a lodge guest.

If you prefer Orcas Island (or dogs!), The Search is the book to start with. Fiona is a dog trainer as well as a canine search and rescue volunteer. Simon is a woodworker with the stereotypical untrained retriever puppy, desperate to save his belongings from the puppy’s enthusiastic mouth. As sparks fly between Fiona and Simon, a killer is loose on Orcas and hunting Fiona. The supporting characters flesh out the island setting, and the discussion of dog training can be interesting in how it applies to both humans and puppies. 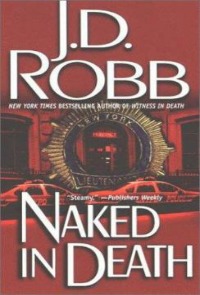 For those of you who prefer more of a science fiction bent to your setting, the In Death series is another way to experience Nora Roberts’ writing. While written under the pseudonym J. D. Robb, the books have the characteristic Roberts attention to character and relationships. They follow Eve Dallas, a NYPD officer in 2058, as she solves crimes in our near future. In the first novel, Naked in Death, she meets Roarke, an enigmatic billionaire (that staple of romancelandia) and falls in love. Unlike other Roberts series, this series only focuses on Eve and Roake’s relationship, moving from courtship to marriage, and their lives as a married couple. Thus far, there are 49 books in the series, giving newcomers a lot to look forward to.