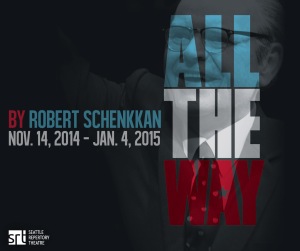 by Andrea
In 1963, John F. Kennedy was assassinated and Vice President Lyndon Baines Johnson was launched into the presidency. In his Tony Award winner for Best Play, playwright Robert Schenkkan dramatizes Johnson’s first year in office. Creating a vivid portrait of a brilliant politician and flawed man, All the Way brings to life Johnson’s passionate engagement with Civil Rights legislation, and hints at the looming complications of the Vietnam War.

ooking for an even more detailed portrayal of Johnson, look no farther than journalist and biographer Robert A. Caro. For the past 35 years, Caro has dedicated himself to researching and writing about Johnson, writing the definitive, multi-volume biography. Lucky for us, 2012 saw the release of The Passage of Power, which chronicles Johnson’s life and career between 1960-1964.

This summer marked 50 years since the passage of the landmark 1964 Civil Rights Act, largely orchestrated by Johnson. In An Idea Whose Time Has Come Todd S. Purdum provides a riveting account of the political machinations necessary to pass the Civil Rights Act, tracing it through both the Kennedy and the Johnson presidencies.

Each of these books brings to life the historical moment. But sometimes, fiction is the only thing that can make you really feel the atmosphere of a time. Bombingham by Anthony Grooms is an intense and moving fictional account of a foot soldier in Vietnam who recalls growing up in 1960s Birmingham, Alabama, as Civil Rights struggles both rocked and gave hope to the community.

of a teenage girl who finds a surrogate family and has her eyes opened to lessons of race, inequality, and empowerment.

After you see All the Way, don’t miss its companion piece The Great Society, commissioned by the Seattle Rep and depicting Johnson’s tumultuous second term in office.

For more suggestions of books, music and DVDs that ties in with All the Way, try this Beyond the Theatre list.