Android, metal man, cyborg, automaton… these are all synonyms for Robot.  Created by man to help make life easier, at least, this is what the hope is.

This idea of a robot can be seen throughout history. In Greek mythology, Hephaestus, a Greek god, made mechanical servants. There is a text in China called the Lie Zi which describes a humanoid automaton, and Leonardo Da Vinci had notebooks with sketches for humanoid robots.

The first use of the term robot comes from Karel Čapek’s 1921 book R.U.R. (Rossum’s Universal Robots.) Capek imagined a world where robots, and robotesses, were invented so man would no longer have to work and could just enjoy a luxurious existence. Humanity would finally have everything it needed. A wrench is thrown in this process when Helena, a woman fighting for the rights of robots, shows up at the main factory that creates robots.

The next author I would recommend is Isaac Asimov, who has long been considered the father of robotics. He created generally accepted robotic behavior by writing the Three Laws of Robotics. You can see this in action in his book, I, Robot, which is a collection of short stories that revolve around Susan Calvin and her involvement in the ‘history’ of robots. She is interviewed and tells stories that illustrate how robots became an accepted use in life. 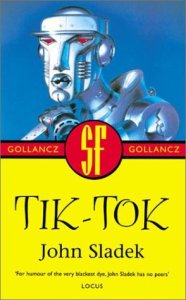 In Tik-Tok by John Sladek, robots are all given “Asimov circuits.” Tik-Tok questions these circuits and believes that they are just a story told to people and robots that everyone believes. Tik-Tok narrates his life and describes many humorous and horrifying encounters that lead him down a dark road. 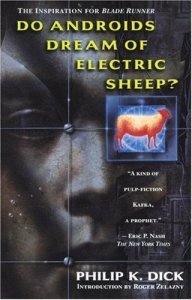 Do Androids Dream of Electric Sheep? by Philip K. Dick was the inspiration for the cult classic movie, Blade Runner. Rick Deckard is a bounty hunter chasing androids. In this post-apocalyptic world, he has grown weary of being a bounty hunter but has to finish what he has started by “Retiring” six highly advanced androids.

With a lighter mood, Keeping it Real by Justina Robson is a pretty funny story about a cyborg. Based in a world where the land of faerie is suddenly connected with Earth again, Lila Black has to watch over an elf that happens to be an obnoxious rock star. Having just become a cyborg, she is still learning about her new abilities and trying to get over her hatred of elves. 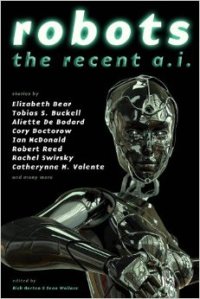 This next book was full of great short stories. Robots: The Recent A.I. didn’t have a single story in it I did not like. Robots gain a variety of emotions throughout this compilation. Many authors come together and created a truly superb collection of stories about robots.

Whether you believe robots will be the end of man, the dawning of a golden age, or just a passive device to help us in everyday life, there are books for you. I enjoyed these books and hope they will help you in your reading challenge.

One thought on “Science Fiction Checklist Challenge: Robots and Androids”