Most of us can remember where we were and what we were doing on September 11, 2001, 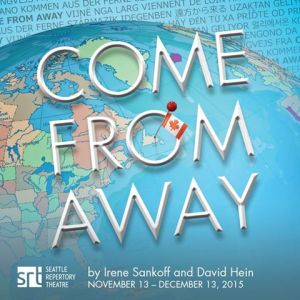 but few outside the tragic loci of that day’s events can have as dramatic a memory of them than the residents of the small Newfoundland town of Gander. It was to Gander that 39 planes carrying 6,595 passengers from all over the world were diverted when American airspace was closed. What happened next was a small miracle, memorably recounted in Jim DeFede’s book The Day the World Came to Town, and now the inspiration for the musical Come From Away, opening at the Seattle Repertory Theatre this Friday, with a preview at the Central library today at noon.

It has often been observed how tragic events can draw people closer together, and help us to bring out the best in each other. Here are some other titles that explore how this happens.

The island of Newfoundland is truly an extraordinary locale, a place like no other. Here are some excellent titles that explore the place and its people,

For still more titles inspired by Come From Away, find this list of titles in our catalog.