In the library’s digital collections, we have a wealth of materials (from photographs and postcards to artwork and newspapers) which give a glimpse into Christmas celebrations of the past.

In our Municipal News Collection, we found mention of Seattle’s first Christmas tree lighting celebration in 1913. The article states “A monster tree is to be set up by the park board and lighted by the city lightning [sic] department in City Hall square. A bank of music and a choir of voices assisted by 10,000 pupils of the grammar grades and high schools will sing Christmas songs on Christmas eve.” According to coverage of the event in the Seattle Times, the celebration centered on a 60 foot fir tree, illuminated with tungsten-nitrogen electric lamps (new technology for the time which was also being used to light Seattle’s streets) and decorated with specially made snowballs and tinsel. This first tree lighting attracted more than 3000 citizens according to the paper’s estimates. 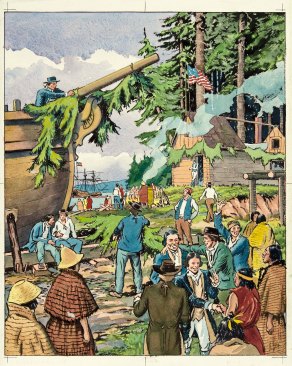 In our Northwest Art Collection, we have an original watercolor by Parker McAllister depicting “Christmas on Vancouver Island.” This was part of a 42-article illustrated history series called the “Discovery of the Pacific Northwest” which appeared in the Seattle Times Sunday Magazine between December 12, 1954 and September 30, 1956. This particular illustration appeared in the December 25, 1955 Sunday Magazine and shows Captain Robert Grey’s crew decorating for their Christmas feast on Vancouver Island in 1781. According to the accompanying article “This is the first Christmas observance in this area of which any description is known to exist, though fur traders, Yankees included, had wintered on the coast prior to that year.” 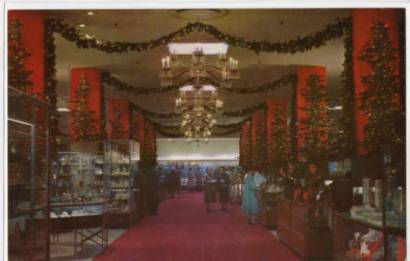 In our Seattle Historic Postcard Collection, we have a 1955 postcard of Frederick & Nelson decked out for the holidays. This postcard doesn’t represent a “first” like the items above but it certainly wins points for showcasing a tried and true holiday tradition. The message on the back of the postcard states “In Seattle, Christmas isn’t Christmas without a day at Frederick & Nelson. Seattle’s most beautiful department store has rolled out the red carpet for its friends and neighbors this Christmas. The scene shows one of the first floor aisles.” A 1955 photograph from our 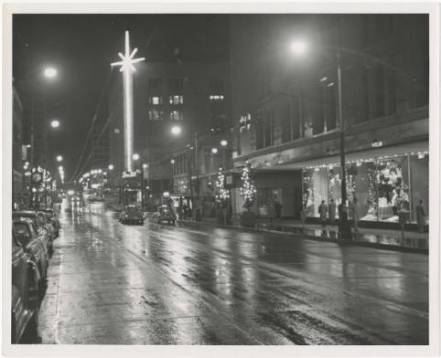 Werner Lenggenhager Photograph Collection shows an exterior view of Frederick & Nelson with its holiday windows lit up along Pine Street. Though the photo was taken 60 years ago, you can still see the familiar site of the iconic Bon Marché star that downtown shoppers continue to see today while running their holiday errands.

Interested in seeing more of the Library’s historic collections? Check out Special Collections Online to see over 11,000 digitized items related to Seattle and Northwest history. 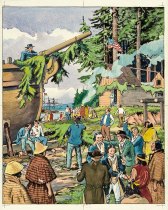 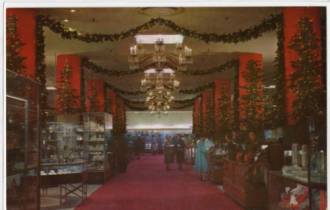 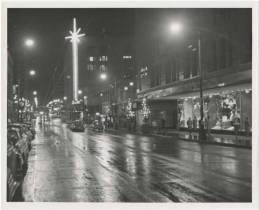 One thought on “Yuletide Cheer from the Archives”