I miss Mad Men. Not any particular character or plot line: I miss the feel of it. That blend of humor and heartbreak, tinged with an uneasy dread that one might easily assume to be bygone innocence viewed through the lens of contemporary disillusionment and cynicism. Yet far more that the show’s meticulous period details and cultural conventions, the most authentically vintage aspect of Mad Men was that very sense of mid-century malaise, reflected by the books and movies of the time. 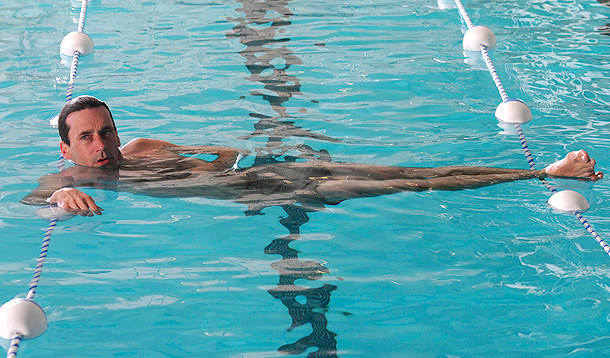 No one writer embodies the essence of Mad Men more than John Cheever, and nowhere is this more obvious than in Cheever’s 1964 short story masterpiece The Swimmer, and in its 1968 film adaptation, both of which will be presented in this Saturday’s Page to Screen program, 1 p.m. at the Central Library. (Invite your Facebook friends and make a day of it – brown bag lunches are welcome). Here’s a great clip that comparing the two, and highlighting John Cheever’s tremendous influence on the show and its style and themes.

And here they are, side by side – Cheever’s hero Neddy Merrill, and our own Don Draper, two men on a strange journey across time; living the dream yet troubled by nightmares; in pursuit, yet also in headlong flight from something they don’t understand, and always with a drink in hand: 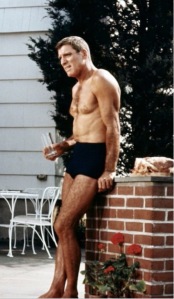 “Neddy Merrill sat by the green water, one hand in it, one around a glass of gin. He was a slender man – he seemed to have the especial slenderness of youth – and while he was far from young he had slid down the banister that morning and given the bronze backside of Aphrodite on the hall table a smack… He might have been compared to a summer’s day, particularly the last hours of one… He was not a practical joker nor was he a fool but he was determinedly original and and a vague and modest idea of himself as a legendary figure. … He had an inexplicable contempt for men who did not hurl themselves into pools.”

Uncanny, isn’t it? Show creator Matthew Wiener has often cited Cheever as a major influence: “The fiction of John Cheever has a voice filled with irony and comedy and pain that, on some level, I’m always seeking to e 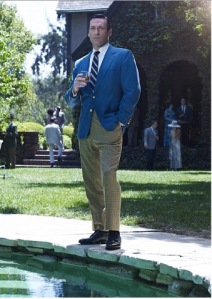 mulate. His short stories present themselves as episodes of TV do – with plenty of story and flawed characters presented without judgment.” After listening to some great Mad Men Music, come salve your Mad Men withdrawals this Saturday at the Library. Dive on in – the Draper’s fine.

Page to Screen presents readings of great short stories, followed by screenings of the films they are based upon. The Swimmer is fifth in the series, which culminates in early April with Andre Dubus’ The Killings, and the film In The Bedroom, starring Sissy Spacek and Tom Wilkinson.