Do you follow the International Dublin Literary Awards? Here’s why you should: 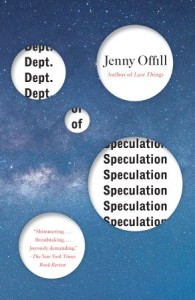 Our librarians nominated Dept. of Speculation by Jenny Offill for the 2016 International Dublin Literary Award, and it made the shortlist. From our nomination:

Offill’s narrative of a woman’s life, presented as a series of spare interlocking vignettes, is funny and acute. She writes in a spare, unconventional style, using a shifting narrative to expose her character’s ambivalence on falling in love and being an artist while also a wife and mother. Just like an x-ray, Offill lays everything bare. This novel is short enough to read in one sitting but good enough to want to begin again immediately.

Dept. of Speculation was my favorite book I read in 2014. I could barely speak after finishing it; it was one of those reading experiences where I remember where I was, the time of day, the light out the window, and my absolute inability to close the book and function in the normal world. I was struck (overwhelmed, really) by Offill’s powerful writing and experimental structure. A story told through fragments wouldn’t usually hold together, but in Offill’s hands it does; she breaks traditional narrative rules and succeeds. Also, it’s short, and I do so appreciate short books with tight writing.

Libraries from 118 cities (representing 44 countries) nominated 160 books for the award. SPL is in good company with these participating libraries. The shortlist is in our catalog (see Dublin Literary Awards – 2016 shortlist), making it easier for you to browse these 10 international gems and place holds. It’s also fun to look at the list and see libraries from around the world nominating different titles.

The winner of the International Dublin Literary Award will be announced on June 9. Follow them on Twitter @DublinLitAward (#DubLitAward) for updates. I know we shouldn’t have favorites, but we kind of do this year.

One thought on “Hey, our pick for the Dublin Literary Award made the shortlist!”