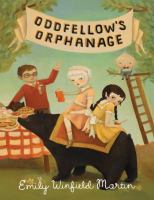 Emily Winfield Martin is the writer of the blog The Black Apple that I have been following for eons it seems. She has also written a few children’s books that are beautiful, delightful, and available from the library; one being Oddfellow’s Orphanage. That particular story tells us about Delia, a silent albino girl, who discovers a family of sorts in the other children living at Oddfellow’s Orphanage.

Through her blog post titled “Help Genevieve”, Emily lead me to the author Geneviève Elverum, who was at the time battling stage four pancreatic cancer. I looked up her graphic novel titled Susceptible in the library catalog. This graphic novel follows the story of Goglu transitioning from the world of childhood to adulthood. I tracked it down on the third floor of Central Library and checked it out. On the opening page was a line of the poem by Joanne Kyger titled “My father died in spring”:

but strange how blood brings curiosity.

My father passed away in April so I was curious what the other lines of the poem held. After doing a quick search online I found the poem and was blasted with emotion. I longed to read more of her words so I found the poetry book that contained that poem and many others; titled As Ever: Selected Poems.

…all of these books were found in one day at the Central Library and that is the wonder this building holds.

One thought on “The Wondrous World of the Central Library”