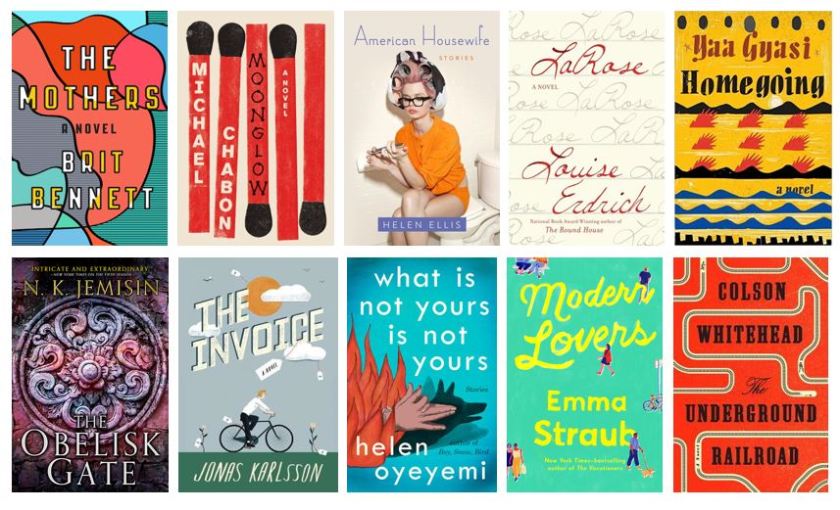 As Reader Services librarians, we spend our days at the Central Library talking to people about books and suggesting reading we think they might enjoy next. Of course, we’re readers too. With the end of the year approaching we sat down and collaborated on a list of the novels we loved most this year. We hope you’ll find something to love, too.

The Mothers by Brit Bennett – A beautiful coming-of-age novel told from the perspective of three African-American teenagers: Nadia, who lost her mother to suicide; Luke, the pastor’s son; and Aubrey, the new girl in town. The Mothers, a Greek chorus of older church matrons, round out the viewpoints.

Moonglow by Michael Chabon – A fictional “Michael Chabon” tells the story of his grandfather, weaving in truth and lies, family legends, existential adventure – and model rocketry.

LaRose by Louise Erdrich – A horrific hunting accident leaves two families destroyed on the Ojibwe territory of North Dakota. A raw and powerful look at how different families deal with heartache and forgiveness.

Homegoing by Yaa Gyasi – Beginning in Ghana as one sister is sold into slavery and the other marries a colonial administrator, Homegoing follows two strands of one family tree down the generations, each chapter introducing a new decade of a family striving for more even as generational trauma unfolds behind                    and in front of them.

The Obelisk Gate by N.K. Jemisin – In this sequel to The Fifth Season, Jemisin delves deeper into her brilliantly created world full of tragedy and hidden agendas, as earthquakes threaten to rip apart the world called Stillness.

The Invoice by Jonas Karlsson – An unnamed narrator, who works part time at a video store, gets a staggering high invoice for his life experiences. A bit Orwellian, served with a lot of wry. Translated from Swedish.

What Is Not Yours Is Not Yours by Helen Oyeyemi – An enchanting collection of intertwined stories that NPR called “Flawless … another masterpiece from an author who seems incapable of writing anything that’s less than brilliant.”

Modern Lovers by Emma Straub – Friends since their college days in a band, three friends – now with their own college-bound children —  deal with secrets from their past. A witty and warm story of friendship.

The Underground Railroad by Colson Whitehead – The 2016 National Book Award Winner follows Cora as she breaks free from slavery on a Georgia cotton plantation, setting off on a journey that unspools the dark heart of this country’s past.