We’ve had hundreds of murders, scores of heists and scams, repeated instances of paranormal activity, and even a bit of cannibalism. Yet is rare that we’ll destroy an entire planet. But during Thrilling Tales: A Storytime for Grown Ups starting at noon today, we just might manage it. In 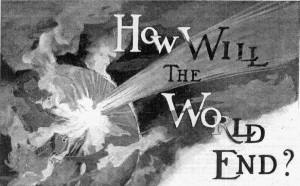 H.G. Wells’ 1897 story The Star, a mysterious mass from outer space crashes into the planet Neptune, gradually unleashing a chain reaction that at first dazzles, and then terrifies a waiting world. Will all mankind perish in a cataclysmic fireball? You’ll have to stop by the Central library today at noon to find out!

Now in its twelfth year, Thrilling Tales typically happens two Mondays a month at the Central Library. Bring your lunch, bring your knitting, bring a friend: we’ll provide the seats, though you might only need the edges of them. Here’s a preview of coming tales for the next few months, featuring murder, mayhem, an alien invasion and a visit from the Devil himself: 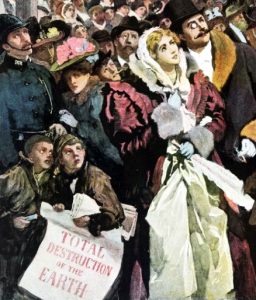 Monday, January 9 – The Star, by H.G. Wells. It was New Year’s Day when the star first appeared in the sky. Many found it beautiful, and presumed it to be a blessing or good omen. The astronomers knew better.

Monday, January 23 – Burning End, by Ruth Rendell. A woman’s work is never done. Linda slaved away every day to take care of her mother-in-law with nothing but contempt in return, but there was one thing she would never, ever do.

Monday, February 6 – The Blameless, by Jeffrey Ford. “Dear Tom and Helen, we hope that you will be able to attend our daughter Grace’s Spring Exorcism. Punch and finger sandwiches provided.”

Monday, March 13 – For Something to Do, by Elmore Leonard. Her old boyfriend the boxer was nothing but trouble, and now he’s come calling on her and her husband with a gun and bad intentions.

Monday, April 3 – Paranoia, by Shirley Jackson. Just because you’re paranoid doesn’t mean that everyone isn’t out to get you.

Monday, April 17 – The Aliens Who Knew, I Mean, Everything, by George Alec Effinger. When the aliens finally landed, were grateful to learn they were far superior to earthlings, and meant us well. We had no idea how annoying that would turn out to be.

Monday, May 15 – Dead Men, by David Ely. A serial killer is on the loose, the bodies are piling up, and Inspector Bates can’t discern any pattern to lead him to the murderer. And yet the answer is staring him in the face.