It’s Black History Month, the perfect time to read about social justice trailblazers both celebrated and forgotten. Margo Jefferson’s wonderful memoir, Negroland, about growing up in a wealthy, elite African American family in the 1940s and ’50s, was my first introduction to Florynce “Flo” Kennedy, an outspoken Black feminist who inspired Jefferson and many others. Jefferson said:

Florynce Kennedy was the first Black feminist I saw in public and action. Lawyer, protester, organizer, she was born in 1916, the same year as my mother–and four years before women of any color got the vote. A whiplash tongue and a cowboy hat; suede and leather pants (am I imaging that she sometimes wore chaps?); dangling earrings and many necklaces (some with women’s rights symbols, some with bright stones and feathers). She was tall and fabulously grandstanding. She’d planted herself and thrived in every movement that counted: civil rights, anti-war, Black power, feminism, gay rights. Her principles never swerved; her tactics never staled. She used to say something like this:
“When Black women tell me feminism is a white woman’s thing, I tell them: you’ve spent all these years, all these centuries, imitating every bad idea white women came up with–about their hair, their makeup, their clothes, their duties to their men. And now, they finally come up with one good idea–feminism–and you decide you don’t want anything to do with it!”

When I read this passage late in Jefferson’s memoir I was determined to learn more about Florynce Kennedy. I was delighted to discover the recent biography Florynce “Flo” Kennedy: The Life of a Black Feminist Radical by Sherie M. Randolph, who was spurred to share her legacy. 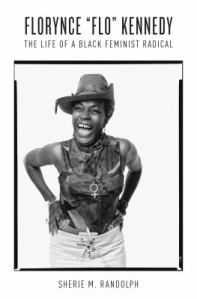 Born in 1916 in Kansas City, Florynce grew up with a strong-willed mother and when a group of white men tried to force them from their home in 1919, she learned that there was strength if you “never took any shit.” Her parents stood up to those men again and again and Kennedy later said: “My parents gave us a fantastic sense of security and worth. By the time the bigots got around to telling us that we were nobody, we already knew we were somebody.”

Kennedy went on to Columbia University during WWII and went on to graduate with a law degree in 1951. During her years as a college student, Kennedy was honing her political views, bringing an intersectional lens while speaking out against interconnected systems of oppression, classism, sexism and racism. Kennedy started her own law firm in Manhattan in 1954 and earned a reputation among the white male lawyers of the time through her informal house parties; for a Black woman in a white male dominated profession, networking enabled Kennedy to attract attention and gain respect.

Kennedy became a well-known figure in New York’s legal world, but attracted even more attention as her activism brought her to the fore in the Black Power and feminist movements in the 1960s and ’70s. Kennedy used street theater and her unique brand of humor to challenge racism, sexism and the abuse of power, pushing those movements to appreciate the interconnectedness of struggles. Although she stood alongside feminist legends such as Gloria Steinem, Florence Kennedy’s powerful influence and voice in the movement has been lost in the intervening years. 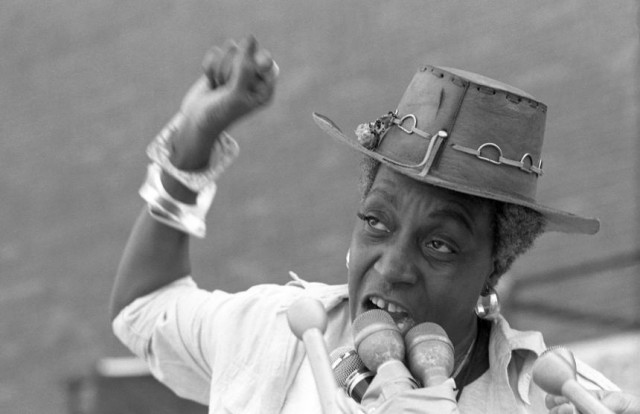 Now is the perfect time to learn about the life and legacy of Florynce “Flo” Kennedy who said “whether you’re fighting for Women’s Liberation or …Black Liberation, you’re fighting the same enemies,” calling out that common enemy as “the racist sexist genocidal establishment.” Another of Kennedy’s rallying cries was this: