The land and coasts that make up the West are many things to many people: recreation areas, sacred sites, grazing land, just to name a few. In the past five years we’ve seen an escalation, reflected in mainstream news stories, of the conflicts among groups with differing visions for public lands: from the ongoing fight over the designation of Bears Ears National Monument, to escalating action over federal land management that culminated last year in the occupation of Oregon’s Malheur National Wildlife Refuge, to a newly urgent discussion about what steps should be taken to save the orca whales of Puget Sound. No matter which side you agree with on these issues, there’s no denying that human actions have had a dramatic and direct impact on land, flora, and fauna. To dig deeper on a few issues, check out these recent books about our Western geography: 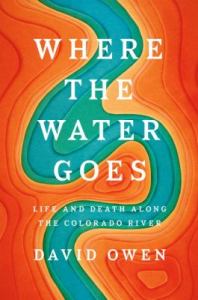 Where the Water Goes: Life and Death Along the Colorado River by David Owen
Rights to water from the Colorado River is a fight that has been raging for generations, and water availability is a primary environmental issue. Owens investigates the twisted history of the Colorado River and the water rights that have held since the early 20th century, and which today continue to be decided by a shady organization. Traveling the length of the Colorado River, from its headwaters in the Rocky Mountains to its now-dry delta near the U.S.-Mexico border, Owens stops at the reservoirs, power plants, farms, fracking sites, and towns that hold a share of the water flow, and interviews politicians, environmental experts, farmers, and other stakeholders. Ultimately, “Owen presents a deep, … useful analysis of the subtle interplay between natural and human needs” (Publishers Weekly).

Eager: The Surprising, Secret Life of Beavers and Why They Matter by Ben Goldfarb
Beavers have long been considered a nuisance species, damaging trees and flooding areas. Challenging that perception, Goldfarb makes the case for beavers as a species vital to healthy ecosystems. Their dams promote aquatic plant and fish growth and provide habitat for other species, forestalling a loss of biodiversity; help control sedimentation in rivers; prevent erosion; reduce damages of climate change; and much, much more. Goldfarb’s narrative takes us from the early days of the fur trade when beavers were killed by the millions up to present-day conservation efforts, compellingly making the case for a return of beavers to the landscape.

Chosen Country: A Rebellion in the West
by James Pogue
Journalist Pogue delivers an examination of issues around public land use brought to the forefront by a series of Western standoffs organized by the antigovernment Bundy family and their followers, including their occupation of Oregon’s Malheur National Wildlife Refuge in 2016. It’s an up close and personal account, as Pogue spends time hanging out with the Bundys and their group and examines his own youthful passions and thoughts on the subject. While Pogue does not spend much time on the alternate viewpoints, he does include an assessment of who would actually benefit from this type of land use policy, who would suffer, and how those dynamics are influenced by unrecognized white male power.