Welcome to another year of Summer Book Bingo and suggestions for the category “set in the NW!” This category is one of my favorites because it gives me a chance to explore my home region in fiction. Find these titles and other suggestions here. 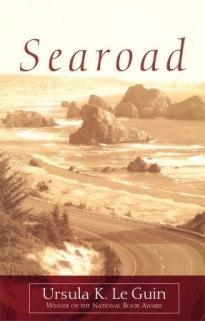 While I’m native to Portland, OR, there’s one book that made me want to call the Puget Sound region home: David Guterson’s Snow Falling on Cedars. I read it as a teen and fell in love with the lush descriptions of the San Juan Islands. The novel is a moving portrait of what happened to the region’s smaller communities in the face of the Japanese-American internment camps of WWII.

I spent a lot of time at the Oregon coast growing up and a less well-known title from beloved, recently deceased author Ursula K. Le Guin, chronicles that area beautifully. Searoad: Chronicles of Klatsand is a set of loosely connected stories about the residents of Klatsand, a fictional Oregon costal town, and features strong, resilient women. Le Guin’s writing is a treasure, as always.

Shifting to a well-known nonfiction author to include another piece of classic writing, Timothy Egan’s The Good Rain is history, ecology, environmentalism and personal narrative all rolled up into one beautiful book about the Pacific Northwest.

In Marrow Island, Alexis Smith also uses an ecologist’s lens to consider our relationship to place and each other in the wake of a fictional Big One (earthquake). The majority of the novel takes place on Marrow Island, north of the San Juans, after The Big One destroys the oil refinery on the island, making it uninhabitable. 20 years later, the main character’s best friend invites her back to the Island where miraculous new growth and sustainable living is possible, but at what cost? Moody and mysterious, this novel will haunt you.

Mink River by Brian Doyle is set in a small town at the mouth of the Mink River on the Oregon coast. It follows the lives of the residents as well as two friends, one of whom is trying to record the stories and oral histories of his Coast Salish relatives for his grandson. Doyle does for the residents of Mink River what Sherwood Anderson did for Winesburg, Ohio.

In his 2016 novel Summerlong, fantasy author Peter S. Beagle, most famous for my childhood favorite The Last Unicorn, gifts readers with a contemporary take on the ancient myth of Persephone set in the islands of the Puget Sound over one glorious summer (this one could also count for “set in summer”).

The Lost Girls of Camp Forevermore by Kim Fu explores the lives of five women after a traumatic event during a kayaking trip at a sleep-away camp in the Puget Sound. The story moves between the event itself and its reverberations throughout their lives as the years pass.

For a too-prescient topical novel, Leni Zumas imagines the lives of five women in a small town on the Oregon coast in an America where abortion is once again outlawed in her debut novel Red Clocks. Grounded in the realism of everyday life, this novel and the questions it asks stay with the reader long after the last page.

Finally, with the movie coming out this August, I’d be remiss not to mention Where’d You Go, Bernadette by fellow transplant Maria Semple (could also count for “made into a movie”). I read this shortly after moving to Seattle and thoroughly enjoyed this biting send-up of the best and worst of Seattle. Our very own Central Library is a setting for what will surely be a delightfully funny movie starring the amazing Cate Blanchett.

For more ideas for books to meet your Summer Book Bingo challenge, follow our Shelf Talk #BookBingoNW2019 series or check the hashtag #BookBingoNW2019 on social media. Need a Book Bingo card? Print one out here or pick one up at your Library. Book bingo is presented in partnership with Seattle Arts & Lectures.