Commuting to Seattle by bus five days a week gives me a lot of reading time. Here’s what I read on the bus in July:

Early Riser by Jasper Fforde. I really enjoyed this book, I think the only issue I sometimes have with Jasper is that it sometimes feels like in his books there are inside jokes I’m not aware of so it takes me a bit longer to truly get into his novels. Once I’m in it though and things start to come together better in my mind I’m good to go. And this was quite a tricky little novel that really kept me reading. I don’t want to give too much away, but the concept of hibernation during winter – considering the current way of the world – was brilliant. It was dystopian light with intrigue and suspense, but in a completely nerdy way. The main character, Charlie, is a sweet and noble character that really comes into his own in the story. At first I was like this guy is either incredibly stupid or extremely lucky, but in reality he was just trying to figure it out with the moral compass he had. He was also in a world where you honestly didn’t know who to trust – I even went back and forth on who he should align with and a few times I was wrong. In the end this book is great fun – readers won’t be disappointed. 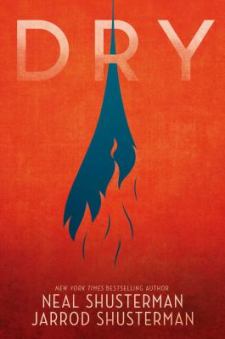 Dry by Neal Shusterman and Jarrod Shusterman. First and foremost, if you are an adult reading this book you need to tell yourself these are teenagers. When the water runs dry in Southern California things quickly escalate – neighbor against neighbor. A group of teens come together, whether they like it or not, to try to survive. I really enjoyed most of these characters especially Alyssa and her brother, Garrett. Alyssa holds on to her moral compass, which would be an incredibly hard thing to do in a crisis, but is something I hope I could maintain in the same situation. Her heart however can sometimes get her into risky situations…people like taking advantage of kindness, but it was still very real. Kelton, her next door neighbor, has been prepared for this very event with water supplies and electrical backup, due to this however, his family is the first to be struck by tragedy. Jacqui the rebel of the group, was impulsive, but I think was secretly the mama bear. Henry is awful – don’t want to give too much away, but I did’t like him from the beginning. All in all, I will definitely be recommending this to my niece.