Commuting to Seattle by bus five days a week gives me a lot of reading time. Here’s what I read on the bus in September: 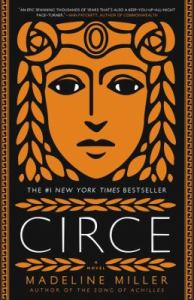 Circe by Madeline Miller. The story of Circe, the daughter of the sun god Helios, banished to an island for Zeus believes her to be a threat. Unlike other children of the gods Circe has her own power – that of witchcraft. On her island she focuses on her craft, turns evil visiting men into pigs (my favorite part), and encounters other major and minor characters in Greek mythology. The guest that makes the most impact is Odysseus. I really, really, really enjoyed this book however I felt like a complete idiot reading it – I didn’t realize how much I didn’t know about Greek mythology! The little I know came from Clash of the Titans, Hercules, and Xena Warrior Princess sooooo I had to look up a lot of stuff.

An Unkindness of Ghosts by Rivers Solomon. On a spaceship called the HSS Matilda, people are segregated by race and governed by the Sovereign. Here we meet Aster, a brilliant mind trapped by those trying to control her. But she is not weak, through the people she loves and shares her life with she finds strength, strength to do the impossible. There is violence in the book, but very necessary to the plot and at times almost understated considering some of the horrible things our nation did during slavery. There were a few times I struggled with the flashes from past to present – made it a bit disorientating. Overall, this is a beautiful and tragic read, definitely a story that sticks with you long after you’ve finished. I loved it so very much.

The Best Bad Things by Katrina Carrasco. The year is 1887 and Alma has been tasked by her former lover and west coast smuggling ring leader, Delphine, to find her missing opium in the Washington Territories. Alma had trained with the Pinkerton Agency in San Francisco, but had been dismissed for behavior – now a spy she will use her wits and her disguise as a man to work all sides to solve the case and try not to get caught in the process. I really enjoyed this book’s grit and its twists and turns. The only struggle I had was the characters; there were quite a lot and I got a little confused on who was who and who was whose man…about halfway through that started to click itself into my brain and I was able to concentrate more. Alma Rosales/Jack Camp was a very interesting character – I liked them despite knowing if I really should. Alma/Jack’s ability to move between genders and their ache for physical intimacy with both genders was pretty fun. Truly unique!