Commuting to Seattle by bus five days a week gives me a lot of reading time. Here’s what I read on the bus in November: 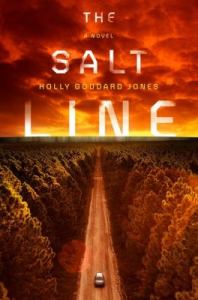 The Salt Line by Holly Goddard Jones. In a dystopian world those seeking adventure and a chance to see nature pay a high price tag to explore outside the salt line – a burnt markation that separates humans from the disease carrying ticks that inhabit the outer zones. But not every one on this trip is there by chance and when they encounter not only ticks, but also people it will take everything they have to survive and those that do must asks themselves if life is better outside the salt line or in. The author does an amazing job of giving you the history of all the characters as she slowly reveals their stories throughout the book. Really enjoyed its uniqueness! 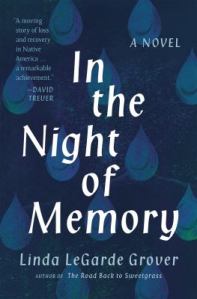 In the Night of Memory by Linda LeGarde Grover. Azure and Rain have been in the custody of the county since they were 3 and 4 years old when their mother Loretta had to turn them over; she was never seen again. Through foster home placements – at times separate and together – they find ways to hold on to hope despite the dark. When their Ojibwe family members find them and bring them home to the reservation they create a new story. And Loretta connects it all despite her disappearance- one of many that haunts the reservation. This was an all around beautiful book, as well as, a needed voice. While it touches upon some of the sadness seen in reservation life, it was also incredibly hopefully.