Friday the 13th of March was a dynamic scene at the Central Library, with patrons queuing for help to find good books to read during the library’s closure, and the DVD aisles packed with browsers. I miss assisting patrons in person in finding a great story to read or watch – though do visit my colleagues at I at Your Next Five Books where we continue to advise readers and listeners online. Fortunately, there are many other ways to enjoy stories right now.

If you have internet access, here are some places to find speculative stories – e.g. science fiction, fantasy, horror, magical realism, slipstream, and anything in the realms of the imagination. Because it times like these, we need stories that take us away from our current realities, don’t you agree? 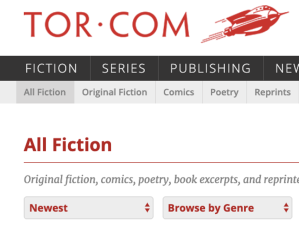 Tor.com is a publisher of books, yes, but they also post full-text short stories, as well as blog posts about books and popular culture weekly. Stories are updated in the carousel at the top of the site. Recent stories stories have been written by the likes of Maria Dahvana Headley, Charlie Jane Anders, Harry Turtledove, Garth Nix, and Neil Gaiman. 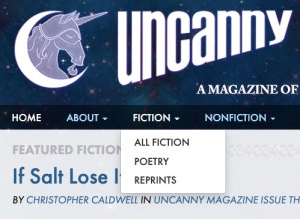 Uncanny Magazine is a darling in the field and has won Hugo and British Fantasy Awards. Co-publishers/editors Lynne M. Thomas and Michael Damian Thomas and their amazing slate of editors have a knack for finding incredible new voices. They publish fiction, nonfiction, and poetry as well as anthologies. Some of the pieces are also available as audio recordings via their podcast, often read by their authors.

Clarkesworld Magazine, published by editor-in-chief by Neil Clarke, has been a mainstay in the genre, having won a World Fantasy Award, three Hugo Awards, and a British Fantasy Award, and also has a regular podcast as well as audio recordings of stories. They post fiction, non-fiction, and art.

I have to end with one podcast because it does such a spectacular job of highlighting speculative authors and stories: LeVar Burton Reads. 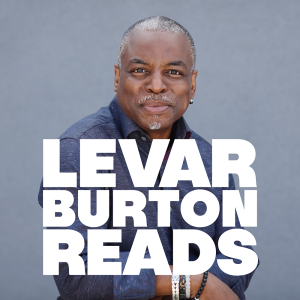 Oh, LeVar Burton! Star Trek TNG fan here! I don’t want to fangirl or anything, but you really are the coolest, kindest…..wait, I guess I meant to tell him that in person at the now postponed Emerald City Comic Con. But in the meantime, join me in listening to LeVar Burton Reads. Listen to his dulcet tones as he unspools each story for your ears on his podcast. There are lots of recordings to enjoy, and Burton is currently trying to figure out how to livestream his show in our time of need. LeVar Burton really is the best.

What did I miss? What sites do you go to for new speculative fiction stories?