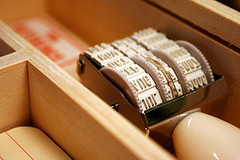 What are the odds? The brand spanking new Library of Congress subject heading for “Public Libraries – California – anecdotes’” is getting quite a workout. In the past six months we have seen the publication of two humorous memoirs by librarians in the Los Angeles area: Don Borchert’s Free For All: Oddballs, Geeks and Gangstas in the Public Library and Scott Douglass’s Quiet Please: Dispatches from a Public Librarian. They’re both entertaining slices of the library life (or as I like to call it, “The Game”), and I recommend them both. You may have to get in line, as they are both proving to be very popular, and not just with library staff either! It seems a lot of you are interested in exploring your inner librarian. While you’re waiting to get a behind-the-scenes look at the glamorous, high-stakes world of public librarianship, let me introduce some of my favorite fictional librarians.

The Cold War and the post-Cold War era gave authors and artists a lot of grist to mill.  While the novels and plays are famous and plentiful, there isn’t much in the way of graphic art that conveys the history of the time while also telling a great story.  Here are four graphic novels that tackle that history in different ways, all with beautiful results.

Our library serves people speaking many languages. Here is one of them.

(Isabel Allende’s recent collection of autobiographical vignettes will also be available in English this April, entitled The Sum of Our Days.)

An unfinished book by a favorite writer always raises questions: How would it have ended? How would the story have changed as the author developed the characters and explored their lives? If the author started out with a plan, would that have changed as the book progressed? Stories inspired by real people and events also intrigue us, because they show us the writer at work, transmuting life into art through imagination.

Edith Wharton’s last novel, The Buccaneers, has both of these fascinations, besides being a great story that’s both romantic and humorous, cynical and touching. The “buccaneers” are a group of young American women who set out for England in the 1870s in search of the social success that has eluded them at home. Armed with beauty and wealth (or the reputation for it) they conquer the English aristocracy, though the consequences are not always the stuff of romance. Unfinished at Wharton’s death, the novel was published the following year in its incomplete state along with her detailed plan for its story; many years later it was given not one but two endings at more or less the same time: one by Wharton scholar Marion Mainwaring and one by screenwriter Maggie Wadey, who also wrote the script for a BBC adaptation. Two of the plot lines echo aspects of the life of Consuelo Vanderbilt, an American heiress who married, and later divorced, an

English duke; Consuelo’s later wrote an autobiography, The Glitter and the Gold, and there are also two biographies about her: Consuelo: Portrait of an American Heiress by James Brough, and Consuelo and Alva Vanderbilt: the story of a daughter and a mother in the gilded age, by Amanda Mackenzie Stuart.

All the best stories leave you wanting more, and fortunately, with The Buccaneers, there’s plenty of more to explore!

Do you like a touch of inspiration with your real-life adventure?

Three Cups of Tea: One Man’s Mission to Fight Tby Greg Mortenson and David Oliver Relin errorism and Build Nations — One School a

OK, I’ll admit I picked up this book because “everyone’s reading it.” It was featured in The Seattle Public Library’s “September Project” and the author Greg Mortenson, mountain climber turned humanitarian, spoke at the Library (listen to the podcast).  But what really grabbed me once I started reading this book were the descriptions of mountain climbing in the forbidding Karkoram mountains of northern Pakistan and Mortenson’s encounters with tribal people in Korphe, a village nestled high in the mountains, who had never seen foreigners before. END_OF_DOCUMENT_TOKEN_TO_BE_REPLACED