It’s not so easy to find movies about characters in the 60+ age category, let alone ones that depict older adults in a positive light. Fortunately, some are available for free viewing on Kanopy and Hoopla attesting that seniors can indeed lead interesting and meaningful lives.

My Old Lady, a 2014 English movie adapted from Israel Horowitz’s book by the same title, can be streamed on Kanopy.  This sophisticated portrait of a lady in her 90’s shows someone in full control of her sharp mind carrying on with her profession. She handles a scheming guest trying to displace her from her Paris home and deals with the drama which plays out when we learn family secrets about the intruder! With Maggie Smith in the lead role some delightful dialogue reminiscent of the one-line ‘zingers’ from the TV series Downton Abbey embellish this film and Kevin Kline holds his own. Well worth watching.

Not surprisingly, perhaps, inspiring older adults appear frequently among foreign language flicks, particularly from France where “joie de vivre” continues in later years. A noteworthy French movie from 2011 is All Together: Et si on vivait tous ensemble which not only shows five friends courageously living together when one of them can no longer live alone, but also successfully handling problems on their own which inevitably come with aging. Iconic actor Jane Fonda depicts graceful aging through her character Jeanne, while the other four actors lend creativity and feistiness to their character depictions. The taboo topic of sex in older life is also candidly depicted and the film is thought-provoking and modern.  END_OF_DOCUMENT_TOKEN_TO_BE_REPLACED

Even though Pride events and in-person festivities are cancelled this year, it is still possible to celebrate LGBTQ resilience from the comfort of your home – and the Library can help with that! Aside from going out to protests and engaging with written content by queer authors, there are also lots of video resources available to you with your library card. Your barcode and PIN number will give you access to lots of documentaries, movies, and other online video content through platforms such as Kanopy. Here are three great queer history documentaries of varying lengths to get you started:

After Stonewall. A 90-minute documentary from filmmakers Dan Hunt, Janet Baus, and John Scagliotti, After Stonewall details the LGBTQ rights movement beginning in the early 1970s until the end of the 20th century. It is the sequel to Before Stonewall, which focuses on the fight for LGBTQ rights prior to the movement’s watershed moment with the riots of 1969. After is particularly poignant in its treatment of the ordeals that LGBTQ people went through during the AIDS crisis of the 1980s and how this political crisis impacted the type of activism that the movement turned towards at the end of the century. END_OF_DOCUMENT_TOKEN_TO_BE_REPLACED

As we continue our walk thru Mark Cousin’s The Story of Film, we’ve now reached the 1970’s, one of the defining decades in cinema history. As we saw in the last column, an influx of talent from television, film schools and independent filmmaking had led to the birth of the “New Hollywood” movement in America. At the same time, major filmmakers continued to emerge from other countries, creating new and even more challenging cinema, with a group of maverick directors arising from West Germany and the New German Cinema movement. 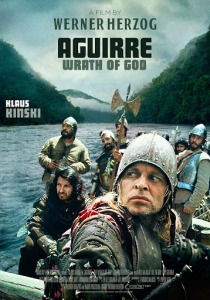 movement would be the directors Wim Wenders and Werner Herzog. Wenders would first find acclaim with his Road Trilogy, which introduced his preoccupation with characters on often aimless journeys. Later films, such as Wings of Desire and the documentary Buena Vista Social Club, would solidify Wenders’ reputation. Werner Herzog’s films, often focusing on flawed protagonists with impossible dreams, would also find world acclaim. A prolific director of both fiction and documentary films, pictures like Aguirre: The Wrath of God, Heart of Glass, and Grizzly Man, would give Herzog a reputation as an accomplished, and somewhat eccentric, director.

END_OF_DOCUMENT_TOKEN_TO_BE_REPLACED

This is the second of three posts featuring graphic novels and comics as the original source material. If you liked what you’ve seen on screen, try reading it…because sometimes the comic book is better.

I admit that I have not watched or read most of what I’ve listed (though not for a lack of trying!) and I made it a point to explore outside the expansive DC and Marvel universe. Today I will be showcasing popular family classics whose comic book roots might surprise you.

The Adventures of TinTin by Hergé

TinTin is a reporter and adventurer who travels around the world with his faithful dog Snowy. Since 1929, Hergé’s meticulous attention to his art and good-natured protagonist has charmed generations throughout the world and totes a Steven Spielberg directed animated movie. END_OF_DOCUMENT_TOKEN_TO_BE_REPLACED

As we’ve seen in The Story of Film, while American cinema had been at the forefront of filmmaking for many years, over time, Hollywood’s movies had begun growing stagnant. The Production Code Administration still restricted what could be said, done, or shown in American movies. But by the early 1960’s, the PCA was losing its hold on the industry. The success of foreign films, which weren’t subject to PCA oversight, plus the studio’s new willingness to challenge the Code, led to the adoption of a movie ratings system in 1968. And the unprecedented success of independent film Easy Rider, actor Dennis Hopper’s directorial debut, encouraged studios to take a chance on new directors, many of whom would make their mark on cinema history.

One of those new directors had locked horns with the PCA and emerged unscathed, successfully negotiating with the MPAA for his film’s release virtually intact. That film, Who’s Afraid of Virginia Woolf?, was the first directed by Mike Nichols, and Nichols’ next picture, The Graduate, would be an even bigger box office success. Nichols would follow up that film’s dissection of youthful, suburban ennui with the star-studded war satire Catch 22 and the science fiction thriller, Day of the Dolphin, among others.