A few readers have asked if the one-word title reading challenge for Book Bingo can include a book with a subtitle. There are no hard and fast rules for Book Bingo (for any of the squares), but I’m going to weigh in with an enthusiastic and reassuring “YES! Read that book with a long subtitle!” because that opens the door for so many wonderful nonfiction books.

However, I draw the line at an article preceding the one-word title. If there’s an “a” or “the” ahead of the word, it doesn’t count — at least not by my rules. But you should play by your own rules.

Back to the challenge at hand. This is one of the easiest categories for rediscovering the joy of browsing in the stacks. Those one-word titles are easy to spot, and serendipity can lead you to a new author or perspective. You can also start at the Peak Picks collection at your favorite branch, where you’ll find these nonfiction titles: END_OF_DOCUMENT_TOKEN_TO_BE_REPLACED

One of the many things I appreciate about the Book Bingo categories is that quite a few can be filled by both fiction or nonfiction, leaving the choice up to the reader. Today let’s look at the “About the Environment” category, which at first glance lends itself primarily to nonfiction, and instead see what fiction we could read.

We asked our young patrons at the Central Library Children’s Center to suggest books for our adult Book Bingo players and they delivered! These young people know their kid lit – they suggested classics both modern and older, video game tie-ins, realistic fiction, fantasy, adventure – there’s something for every reader of any age. Find the full list here: #BookBingoNW2018: Central Library Children’s Center patron suggestions for “Suggested by a Young Person”

, the first novel by Suzanne Collins, author of The Hunger Games trilogy, is something of an urban Alice in Wonderland. I’m not a fantasy reader, but once I picked it up I was hooked! I devoured the first hundred pages in one sitting. END_OF_DOCUMENT_TOKEN_TO_BE_REPLACED

August may have few nationally acknowledged holidays, but if you appreciate literature I’ve got a few things you can celebrate.

Kicking off the month we have National Book Lover’s Day taking place on August 9th. On this day celebrate by enjoying the smell of books, visit the library, drop literary references into casual speech, or just enjoy a favorite book.  Here are a couple book-themed books to help with the day:

Reading Lolita in Tehran by Azar Nafisi is the author’s memoir from her time in Iran when she started an underground book club with seven girls reading western books outlawed by the government.

Ink and Bone by Rachel Caine depicts an alternative history where the Great Library of Alexandria still exists and it is illegal to own books. END_OF_DOCUMENT_TOKEN_TO_BE_REPLACED

I’m sure you have heard of the Newbery Medal, Man Booker Prize, Hugo Award, and many, many other author awards. In addition to these well-known awards, let me introduce you to a few newer ones and their winning authors.

Black Caucus American Library Association (BCALA) Literary Award, established in 1994, recognizes African American authors in both fiction and nonfiction. Some of these outstanding works are listed below:

Grace by Natashia Deon follows the life of a runaway slave and her daughter. Deon’s writing is beautiful and gives you an intense conclusion. This won the Fiction Award in 2017.

The Other Wes Moore by Wes Moore was the Nonfiction winner in 2011. This fascinating book is a memoir of the author and also the story of another boy who grew up in a neighborhood nearby with the same name.

Chasing Utopia by Nikki Giovanni won the 2014 literary award by using simplicity and humor in this collection of poems that are part memoir. 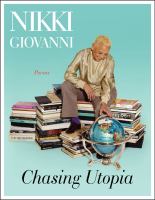