It’s easy to wonder sometimes if there are any new ideas in Hollywood, as so many movies and TV series are adapted from books, plays, comics, etc. But the best adaptations make the original content feel fresh and new, drawing audiences back to the source material. Continuing our tradition of books-to-screen posts, here are some of the latest options for this year’s Book Bingo book-to-screen category.

Several classics have been adapted (again) recently from Jane Austen’s Emma, to Joan Lindsay’s Picnic at Hanging Rock, to Shakespeare’s Macbeth (in a film directed by none other than Joel Cohen). In July, Austen’s Persuasion receives a similar treatment as Autumn de Wilde’s 2020 film Emma, a fresh, cheeky, pastel-infused take on one of Austen’s most problematic heroines starring Anya Taylor-Joy. The latest of many adaptations, Carrie Cracknell’s Persuasion premieres on Netflix on July 15th, and features Dakota Johnson, Cosmo Jarvis, and Henry Golding in yet another rich, dashing romantic lead. Also worth watching/reading in the classics/historical category is Gentleman Jack, an HBO series adapted from the memoir The Secret Diaries of Anne Lister, or ParkChan-Wook’s 2016 film The Handmaiden, adapted from Sarah Waters’ 2002 novel Fingersmith.

Paul Gallico’s charming 1957 novel Mrs. Harris Goes to Paris, about a London charwoman who falls in love with a client’s Dior dress and decides she simply must have one of her own, is getting a big-screen movie release END_OF_DOCUMENT_TOKEN_TO_BE_REPLACED

Need to fill a couple of spots on your Book Bingo card, and looking to get a book quickly? The Peak Picks display at your Library may have just what you need to get at least one bingo line or, perhaps, an entire blackout. Although we think all Peak Picks should be on a reading list, for the sake of time (and finishing as much as you can for Book Bingo), we’re featuring titles that are either relatively short, or readily available now. It’s down to Book Bingo business for these next eight days…

Romance: Accidentally Engaged by Farah Heron:  “A fake engagement sparks real romance on the set of a cooking contest in this delightful rom-com. Reena Manji, an aspiring baker, is initially charmed by the flirtatious smile and ‘brown Captain America’ good looks of her new neighbor, Nadim Remtulla—until she discovers that their meeting was not serendipitous but the result of a business deal between their fathers. Reena immediately rejects the idea of an arranged marriage with Nadim, but when an opportunity arises to appear on a Toronto cooking show for couples, she turns to him for help. Equally sweet and spicy, this is sure to leave readers smiling.” – Publishers Weekly.
Also: One Last Stop. END_OF_DOCUMENT_TOKEN_TO_BE_REPLACED

As Summer Book Bingo 2021 comes down to the wire (deadline: Sept. 7), you may be looking to maximize your remaining reading time. To that end, here are a selection of mysteries that clock in under 250 pages, for rapid reading. Feeling more leisurely? Check out our longer list of suggested mystery/crime novels.

END_OF_DOCUMENT_TOKEN_TO_BE_REPLACED

Still struggling to find the right book for your Sports Book Bingo square? Never fear, your intrepid Seattle Public Library sports librarian has some suggestions for you, whether you’re a diehard sports writing fan, or have never picked up a book about sports before in your life.

Confession time: despite serving as the Library’s sports librarian for the past 8 years, I never really understood the appeal of reading about sports until I picked up Levels of the Game by John McPhee a few years ago. This slim volume hooked me from the first page with its insightful profiles of a young Arthur Ashe and his wealthy, white opponent Clark Graebner, skillfully woven into a nail-biting narrative of a career-changing tennis match. In fact I enjoyed McPhee’s sports writing so much that I returned to him to complete my square for this year’s Book Bingo by reading A Sense of Where You Are, his fascinating portrait of Bill Bradley and his phenomenal basketball playing at Princeton. END_OF_DOCUMENT_TOKEN_TO_BE_REPLACED

Need a suggestion for your BIPOC Food Writing Book Bingo square? Expand your reading (and eating) palette with these tasty, filling and thoroughly engrossing memoirs and cookbooks!* 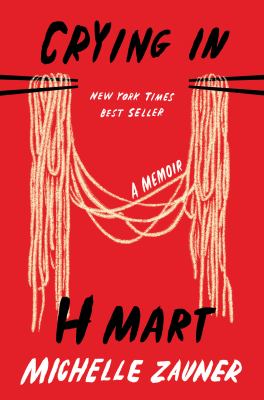 Noted indie rock musician Zauner (Japanese Breakfast) has penned a heartfelt and captivating memoir about growing up Asian American in a predominantly white Pacific Northwest community and her complex relationship with her mother, with whom she shared a fierce love of Korean food. Zauner writes candidly about her mother’s early death from cancer, her attempts to care for her and her grief, weaving evocative descriptions of Korean dishes and cooking throughout. Currently available at most Library locations as a Peak Pick.

Notes From a Young Black Chef by Kwame Onwuachi

Top Chef fans may remember Onwuachi from Season 13, when he wowed the judges with his pickled shrimp with cucumber onion salad, among other delectable dishes that drew on his Nigerian heritage. In this absorbing memoir, he recounts his journey from a rough childhood in the Bronx to working in three-star Michelin restaurants and finally opening his own highly anticipated restaurant before he turned 30. END_OF_DOCUMENT_TOKEN_TO_BE_REPLACED