Remember that huge cylinder hovering over Earth, desperately sucking up the ocean in search of long lost whales in Star Trek IV: The Voyage Home?

Well the “gigantic and probably dangerous object in the sky” theme makes great science fiction. No “take me to your leader” message here, folks, instead an unfathomable confrontation with an artifact that dwarfs your imagination. The best part is the mystery, knowing nothing about origins or destinations. But headlong into the dark unknown you go, reading below with these three works of something in the sky… 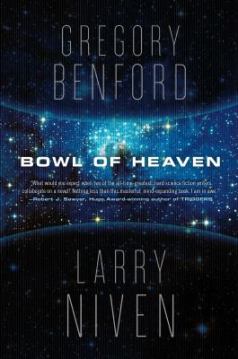 BOWL OF HEAVEN
By Larry Niven and Gregory Benford

Mysterious radio waves draw humanity’s first deep space mission, but mid-journey and thousands of light years from Earth crew members wake up to a surprise – through the view screen is a gigantic structure cupping an entire star. It’s as big as a million Earths, but does anybody live on this strange bowl-like structure? Or more importantly, will they like visitors? This is a fast moving, first installment of a series that’s sure to entertain. The sequel, Shipstar, just came out in 2014. END_OF_DOCUMENT_TOKEN_TO_BE_REPLACED

When I was in third grade, in the early 1970s, I encountered Arthur C. Clarke on a classroom book spinner.  I was intrigued by the cover and the title and promptly took the book home and devoured it, thus beginning a lifelong love of hard science fiction.  My tastes have broadened considerable since, but most of my teen years were spent reading Clarke, Isaac Asimov, Frank Herbert, Robert Heinlein and others.  Clarke, who wrote more than 100 books and 1,000 short stories and essays,  died on March 18 at age 90 at his home in Colombo, Sri Lanka (see this excellent obituary from the Washington Post).  Here are my favorite four Arthur C. Clarke titles, with thanks to the late master.

2001: A Space Odyssey  His best-known work, and one of the best movies of the century, this story deals with humanity’s first encounter with an alien intelligence beyond our comprehension.

Childhood’s End One of his first works, in which giant silver ships appear in Earth’s skies and take up the best and brightest humans for future evolution while eliminating the rest, with an ending that is positively Wagnerian.

The Fountains of Paradise No aliens in this one! This story contemplates the construction of elevators from equatorial Earth to space – an idea which is under serious consideration among scientists today. It must be noted that Clarke was the first to imagine communications satellites orbiting the Earth, so the plausibility of the story makes it all the more fascinating.

Rendezvous with Rama tells of humanity’s first encounter with alien life, in the form of a huge cylinder approaching Earth that poses more questions than answers.