By Jen B and Ann G

This Monday, July 14, is the 225th anniversary of the storming of the Bastille – when Parians invaded the fortress and prompted the French Revolution. The Bastille was for them a symbol of everything the uncaring old regime and its bloated monarchy stood for. The violence and passion of the attack made it clear to King Louis XVI that things might not end up going his way. Here below, two librarians share ways to commemorate the anniversary!

For a local hit of French culture (and, more importantly, food), travel to the distant reaches of Madison Valley for Bastille Bash 2014, where you’ll find live music, wine tasting, gourmet comestibles, and other festivities! And then when you’re home again, try some of these great titles…

Ann says: If you’re interested in the bloody origins of what is now a French National holiday, start with a great overview in Citizens: A Chronicle of the French Revolution. In it, history geek Simon Schama does for the French Revolution what he did for British history in similarly magisterial style. He relates not only the broad sweep of events, but also the day-to-day stories that affected them. END_OF_DOCUMENT_TOKEN_TO_BE_REPLACED

During the French Revolution of 1789-1799, a woman was executed. She was married to a member of the nobility. Her husband was a well known scientist (?), as was she. What was her name?

Thank you for your question. The French husband and wife scientific team were Antoine and Marie Lavoisier. Lavoisier, a chemist and physicist, established the practice of accurate measurement END_OF_DOCUMENT_TOKEN_TO_BE_REPLACED 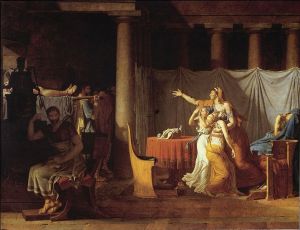 The gifts of a great artist can be used to further political ends. Jacques-Louis David, painter of the French revolutionary era, created several wonderful paintings that were fraught with political and social meaning, but are still notable on a purely artistic level.

One such painting tells a remarkable story. Called Brutus, or Lictors Returning the to Brutus the Bodies of his Sons, it is officially titled more grandly as “J. Brutus, first consul, has returned to his home after having condemned his two sons, who had joined the Tarquins and conspired against Roman liberty; lictors bring back the bodies so that they may be given burial.” David painted this during the first year of the French Revolution. King Louis XVI was beset with turmoil and there was a powerful political current to depose him. It was during this tumultuous time that David decided to illustrate an episode from Roman history.

Tarquin the Proud had been the King of Rome, and according to legend he was an abusive END_OF_DOCUMENT_TOKEN_TO_BE_REPLACED