The toilet paper is gone. Small businesses are closed. The freeways are empty. Our hands are raw from washing them so often. Life feels surreal. Are we in an apocalyptic comic? Lest we start to wonder if reality is fiction, take a look at other weird worlds through Hoopla’s digital comics.

From kid favorites like Sheets and Big Nate to the locked rooms of Locke & Key (now streaming on Netflix), there are comics here for everyone’s taste. Digital comics on Hoopla are always available, so you’ll never have to wait with baited breath to see what happens next. You can browse by title, author, illustrator, series, or publisher. Image Comics has a great catalog of boundary pushing titles like Descender, Saga, and Rat Queens.

All your favorite superheros can be found in DC and Marvel’s catalogs. Last but certainly not least, Seattle’s very own Fantagraphics catalog is available, with big hits like My Favorite Thing Is Monsters and I Am Not Okay With This (also streaming on Netflix). None of us are ok with this, but we’ll pull through. And when it gets really weird out there, curl up with some lasagna and a fat orange cat. Garfield always has your back when the world is too much.

I don’t know about you, but the idea of being quarantined for a few days sounded like a great idea with all the books and movies I have on my list. Now that I am stir crazy and want to get out of the house that is highly inadvisable, so I decided to put together a list of books and movies that will scare you into staying home. All of these items are available through Overdrive, Hoopla, or Kanopy.

Pandemic 1918: Eyewitness Accounts From the Greatest Medical Holocaust in Modern History by Catharine Arnold: A well researched book told through personal essays and medical journals about the last time we went through a pandemic.

The Last Town on Earth by Thomas Mullen: A fictional account of a small town in the Pacific Northwest that has decided to quarantine itself during the Spanish Flu.

Severance by Ling Ma: Candace is one of the few people in the world that is immune to Shen Fever. She has a photo blog of the empty streets of New York eerily familiar to our own; The Great Empty Photographs by The New York Times Introduction by Michael Kimmelman March 23, 2020, which you can access for free with your library card through New York Times Digital.

The Road by Cormac McCarthy: We never find out what happens to wipe out the population of the world in this classic novel, but it shows a very stark reality that we might not want to risk!

The Hot Zone  by Richard Preston: A fictional account, with strong scientific facts, of a virus that is killing off the world. A SWAT team of soldiers and medical providers attempt to stop the spread.

Feed by Mira Grant: You can’t talk about a list of books and movies about a pandemic without talking about zombies.  This book not only includes horror but political intrigue.

The Walking Dead by Robert Kirkman: You can get the complete series of the graphic novels on Hoopla!

If you just can’t focus on books right now, the library also has movies that you can stream to scare yourself indoors.  Of course, just like the books, you can’t compile an apocalyptic list without zombie movies.

Train to Busan: This Korean film is centered around passengers stuck on a train during a zombie invasion.

The Last Man on Earth: This movie made in 1964, with Vincent Price, is about a guy who thinks he is the last person on earth after a virus has wiped out the world.

It Comes at Night: In this 2017 film, two families that don’t know each other are quarantined together after the apocalypse. Could you imagine being cooped up with strangers right now?

Pandemic: Hallmark Channel made this miniseries in 2007.  Who knew that they were going to be able to predict where we are at today.

You can now sign up instantly to receive access to e-books and e-audiobooks through OverDrive. To sign up for this service, you have to be 13 years of age or older, live in Seattle, and have access to a mobile phone number in order to verify your account.

If you’re a live show junkie, Washington’s new “Stay Home, Stay Healthy” order might have you feeling a little stir-crazy. Not to worry: we’ll be writing a series of posts that might help you get your music fix with the aid of streaming services like Freegal, Hoopla, and Kanopy.

First up, let’s take a deep dive into the world of the 90s riot grrrl movement. Consider watching Elizabeth Moss’ feistiest performance yet (yes, even more hot-blooded than Offred of The Handmaid’s Tale) in the 2019 film Her Smell, available from Kanopy.

END_OF_DOCUMENT_TOKEN_TO_BE_REPLACED

One of the things I noticed the most about being home the first few days of self-isolation was my lack of movement. With gyms and some parks and playgrounds closed, and with more people sheltering in place, innovation began to occur. My local yoga studio started doing free yoga classes online via YouTube. Talking to my friends on social media or Facetime, I heard their gyms have created at home workouts to get them through week by week. Not everyone has that kind of access, but the library can help!

Access Video, which has unlimited video-on-demand, can be watched on your computer, tablet, or phone. Access currently has a Yoga, Pilates, and more section right now. It also has something for every age. If you are homeschooling your kids they offer Pilates Kids – one item of note is Study Break Workout: “Refocus, energize, learn better, and have fun with this innovative program that teaches kids simple breathing and exercise techniques that can be performed while seated in a chair at a desk” (Access Video). END_OF_DOCUMENT_TOKEN_TO_BE_REPLACED

Tired of the Joker and Batman? Let’s take a look at the women of DC comics from the library and our digital comics collection in Hoopla!

Harleen by Stephan Spkecj focuses on Dr. Harleen Quinzel before she became Harley Quinn. A true origin story it shows us how she was manipulated by the Joker in Arkahm Asylum while working there. Though it does have the Joker throughout the story, ultimately the story is about her and really sets it apart from every other version of the Joker and Harley Quinn I have seen. Best part is it doesn’t require any previous knowledge to enjoy. Do be aware this is part of DC’s more adult label: DC Black. 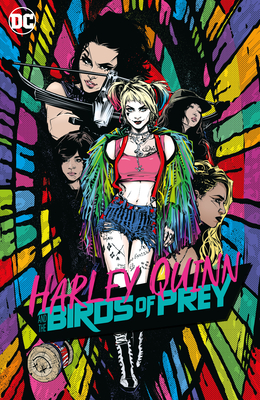 Harley Quinn and the Birds of Prey is not required reading to enjoy the movie of a similar title but is a great way to jump into Birds of Prey the ultimate DC superhero team (okay maybe not, but its DC’s biggest women only team, which, lets be frank, is hard to come by). Follow these awesome women as they fight evil, perhaps not necessarily as superheroes, but not super villains either. END_OF_DOCUMENT_TOKEN_TO_BE_REPLACED