My main form of reading on the bus was audio books, then that changed to long walks with a pair of earbuds, but as the weeks go on it’s been physical books on my shelf that have been getting more and more attention even though my reading habits have drastically slowed. Here’s what I read at home in May:

Creatures by Crissy Van Meter. Set on Winter Island off the coast of Southern California, we meet Evie who has mostly been left to herself having been abandoned by her mother and raised by a neglectful father. Her father is famous for his marijuana strain called Winter Wonderland, but relying on the seasonal tourist boom finds them struggling financially more often than not. Her mother comes in and out of her life over the years, most recently a few days before her wedding day when a dead whale has washed to shore. A story about Evie finding out who she is, what she wants, and how the END_OF_DOCUMENT_TOKEN_TO_BE_REPLACED

Book Bingo is taking us back in time to the 1920s! Books published in the 1920s made up most of my English curriculum and though it was often hard to love a book that was assigned, that century on its own has held a lot of fascination for me, especially now, a hundred years later.

This was one of the few books assigned to me that stuck and stuck hard. I fell in love with Gatsby’s world, this idea of trying so hard to battle where you come from. The thought of losing oneself to become what someone else wants no matter the cost was mind blowing to me. But also the visually stunning landscape, the decadence, when Baz Luhrmann’s The Great Gatsby film came out it felt like it was made for me. It had all the beauty and the darkness visualized perfectly, with an amazing soundtrack! END_OF_DOCUMENT_TOKEN_TO_BE_REPLACED

For me March was always the kick off to camping season. Finding a cabin early in the season then in April heading to our family campsite on the Olympic Peninsula for opening day of fishing; May and June to Eastern Washington before it gets too hot and that itch to go and explore is still there. To combat that sense of go, go, go I walk since it’s now my only form of escape. What I noticed this time around, since I have the time and don’t feel a need to rush, I actually pay more attention to my surroundings.

I found a pocket park near my house. A tribute to fallen motorcyclists with trees and placards honoring those who had passed. Walking through slowly I read all the names and couldn’t believe I hadn’t seen it before. Maybe because it was next to a busy street and so more of a place we pass then visit, but not that day. END_OF_DOCUMENT_TOKEN_TO_BE_REPLACED

I’ve found that commuting by bus gave me a lot more time to focus on my reading and being at home creates so many distractions, I have less time to focus on a book in my hand. My few little escapes to walk the neighbor have really been the only time I can slow down and listen to a book. Here’s what I read at home in April:

The Salt Path by Raynor Winn. In a business deal with a supposed friend, Raynor and Moth lose everything they have and become homeless. On top of that Moth has been diagnosed with a terminal illness. They make the decision with the little time they have left to walk the 630 miles of coastal path from Somerset to Dorset. This memoir, despite all the loses, was incredibly hopeful and the scenery was breathtaking. From the people they meet along the way and the opportunities that are discovered, it reaffirmed for me that life is what we make of it. END_OF_DOCUMENT_TOKEN_TO_BE_REPLACED

What better way to announce Book Bingo 2020 then with a teaser square?! Not to mention a square that is much needed. Here are a few books to get you started on completing your Uplifting square! And keep an eye out for the full downloadable card in early May. 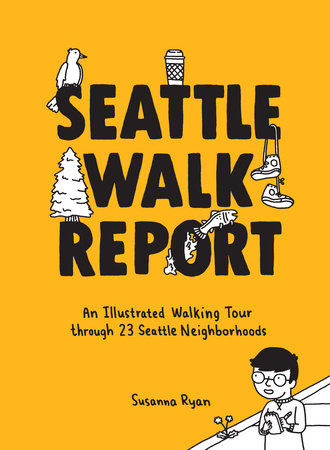 We have to start with the talented Susanna Ryan, who made our amazing Book Bingo card this year! If you haven’t had the chance to check out her comic the Seattle Walk Report on Instagram, you can get your fix with the book in print and on Overdrive. Walk through Seattle without leaving your house and see all the quirky and interesting sights the city has to offer from your own living room. Want more? Check out our podcast featuring Ryan–hear a reading as well as a Q & A session with Paul Constant from Seattle Review of Books. END_OF_DOCUMENT_TOKEN_TO_BE_REPLACED