Content Warning: This post links to an historical newspaper article that uses the term “homosexuals,” which is an outdated term used to characterize gay people as having a psychological disorder.

In response to local interest on the history of policing in Seattle and community-driven police reform movements, Shelf Talk presents a three-part series that dives into historical resources on these topics. Part 1 examines police accountability starting with two events in 1965, Part 2 looks at controversy surrounding the creation and siting of the East Precinct, and Part 3 concludes with events in the 1980s and 1990s.

From proposal to opening, the creation of the Seattle Police Department’s East Precinct took nine years and cost approximately $3.6 million. From the outset, community organizations, leaders, and citizens from the Black community, and later the gay community, resisted various proposals for siting the precinct within the Central District neighborhood.

At a special meeting of the City Council on July 27, 1977, a brief discussion of a bond proposal for police precinct stations took place. The issue appeared on the ballot September 20, 1977, and passed 73,745 to 37,258. Council President Sam Smith, the first Black City of Seattle council member, shared his views:

The people in the Central community pay the tax that supports the north and the south precinct and I think that they are quite willing to pay the tax to support that third precinct because the whole structure of government is moving towards neighborhood operations. Just this morning, I participated in the opening of an unemployment security office in Ballard, so that the people in that general northwest neighborhood where Mr. Hill lives would not have to come downtown to Taylor Avenue North but that they could go out in that neighborhood to get services. So the people of the Central community have long been denied, often promised, and it’s time for delivery.

You can listen to the entire Special Meeting of City Council, July 27, 1977 as a part of the Seattle Municipal Archives’ online exhibition, Seattle Voices.

Although initially proposed to be located at 14th and Yesler, the City focused on 23rd and Yesler, near the Seattle Public Library’s Douglas-Truth branch (then named Yesler Branch). Isaiah Edwards, spokesman for the Coalition Against the Proposed East-Central Police Precinct Station, captured the sentiments of many: “The black people are incensed at the thought of bringing the station into a black renaissance area–like Laurelhurst or Windermere would be to the whites,” noting the educational complex, library branch, children’s clinic, and two training centers all within a block of the proposed site. Responding to the implication that crime was an issue in the neighborhood, Edwards responded: “It isn’t; the rate of crime in the central region is less than the rest of the city.” (“Site of Police Station Opposed” Seattle Daily Times, 27 May 1979, p. 144.)

Despite the persistent and growing community opposition, the city continued with planning for the precinct at 23rd and Yesler. On July 29, 1981, a group of activists occupied an abandoned fourplex where the precinct was to be developed. Representing several groups, including the Coalition Against The Police Precinct, the National Black United Front, Mujer Housing Project, the Local Action Focus of the Peoples Anti-War Mobilization, and the Central Area Housing Alliance, they called for affordable housing instead. After breaking down the barriers, they mowed the lawn, cut brambles, and painted the trim. They indicated they would seek tenants from the city’s long wait lists for low-income housing. (“Protesters Take Over Site for Police Station” Seattle Daily Times, Sports Final ed., 30 July 1981, p. 16.) 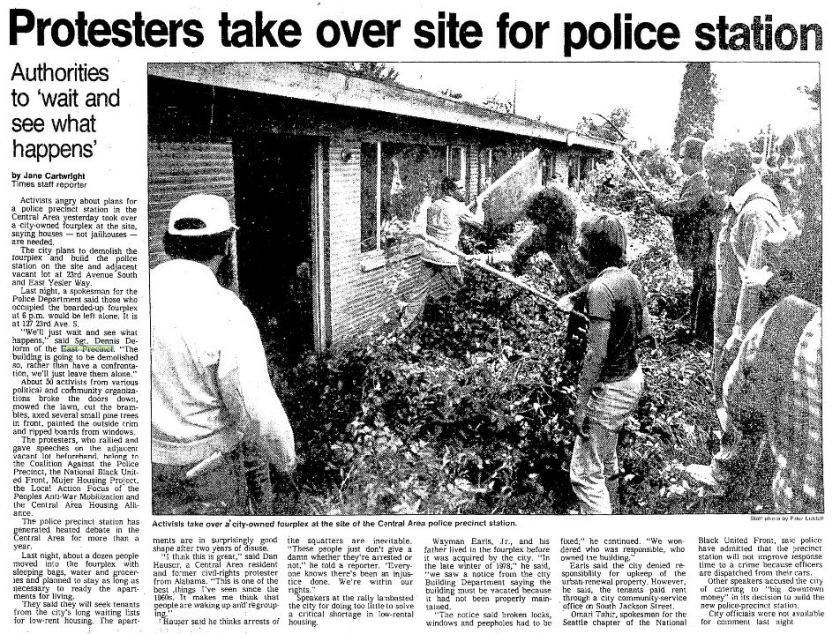 12th and East Pine
“It ain’t gonna make ’em come no quicker. But why do they need to build it? Instead they should give the money to poor folks.”

The next site proposed, and ultimately built, was 12th and East Pine. It too was met with community resistance, albeit underlined by begrudging acceptance of the inevitable. Chibby Lagmay, then 19 and a resident on Capitol Hill shared, “It doesn’t seem necessary. It’s seems weird for Capitol Hill. There’s not much crime here.” (“A Police Station at 12th and E. Pine?” Seattle Daily Times, Final ed., 18 Jan. 1983, p. 12. )

The Greater Seattle Business Association, which represented businesses that catered to the gay community expressed concern that the precinct at 12th and East Pine would have a chilling effect on the community. After meeting with police organizers, the Greater Seattle Business Association was “given assurances they were aware of our concerns.” Oscar Jordan perhaps summarized the neighborhood views best: “It’s more expenses and they don’t need it. The Public Safety Building is adequate. But it won’t bother me none, as long as they (the police) don’t come in here and wreck the atmosphere.” (Ibid.)

~posted by Joe B.

If you missed Part 1 of this series, you can read it here: A History of Seattle Police: Part 1, Accountability.

Recent events have again highlighted long standing discussions on public safety, the appropriate use of force, the goals and mission of police forces, and accountability to the public, among related topics. In Seattle, how have these conversations changed over time, and what lessons might we find in the past to provide direction and shape public policy in the future?

In response to local interest on the history of policing in Seattle and community-driven police reform movements, Shelf Talk presents a three-part series that dives into historical resources on these topics. In this series we will look more closely at Seattle’s history to see how it impacts us today. First, we will look at how two events in 1965 anticipate in many ways the current conversation on police review boards and greater accountability to the public. (In our next post, we will look at the controversy surrounding the creation and siting of the East Precinct, and our final post will review events in the 1980s and 1990s.)

Content Warning: This post and the linked historical articles contain mentions of racial trauma, violence against Black bodies, and racial slurs that can be disturbing.

Attempts to call for an independent police review board in Seattle began as early as 1955​, particularly in response to that year’s Mayor’s Advisory Committee on Police Practices which found that the “…Seattle Police Department — like the white community — held essentially racist attitudes about Black citizens, frequently stereotyping them as ‘criminal types.'” Despite the report, requests for an independent police board were denied, and instead only sensitivity training for police was recommended.

Formal attempts to create a police review board can be traced back to a request by the American Civil Liberties Union (ACLU) in November, 1964 for a hearing on the creation of a police review board. Recently, the Seattle Municipal Archives has made audio, transcripts, minutes, and more from the meetings available digitally through their Seattle Voices online exhibition portal. Key figures, including the Reverend Samuel McKinney, testified. END_OF_DOCUMENT_TOKEN_TO_BE_REPLACED

Seattle Reads, the arts, and gentrification was the topic in our Throwback Thursday post on March 31, 2008.

If you have picked up this year’s Seattle Reads novel, The Beautiful Things that Heaven Bears by Dinaw Mengestu you’ve had a chance to get one novelist’s take on some of the issues and pressures that can fracture a community changing in the face of gentrification and immigration.

City Councilmembers will hear from Seattle residents, arts and entertainment venues and organizations, property owners, developers, and officials on how the Council might go about establishing an overlay district to offer incentives and controls in a specific area to encourage or preserve particular kinds of activities, spaces, and/or design. How can the city grow in a healthy balanced way that benefits all? This could be an exciting opportunity to add your voice as “A City Makes Herself.” END_OF_DOCUMENT_TOKEN_TO_BE_REPLACED

Recently on a streaming service, I watched a documentary on White Privilege.  At the beginning of the documentary, which was hosted by a white women, there was a room full of people of color and she asked what can we do to help?  The response was don’t put the work on us to teach you how to change.  This is something I have struggled with on my journey to become more educated on Race and Social Justice.  I have wanted to learn and change but didn’t know how to do it without learning from people of color.

I have always read books involving social injustice and if you are looking for a great book list a place to start is here.  Ultimately though three things have really brought me to where I am today which is my never ending journey.  They are a documentary on white privilege by Tim Wise, a library program that is available by podcast, and the most recent book I read by Crystal M Fleming.

Before “white privilege” become part of our vernacular, Tim Wise was teaching about it.  He would do the college lecture circuit. You can watch Tim Wise: On White Privilege.  Mr. Wise does a great job of breaking down what white privilege is and how it negatively affects society at large. END_OF_DOCUMENT_TOKEN_TO_BE_REPLACED

From #MeToo to Black Lives Matter to March for Our Lives, the voices of activists are ringing loud and clear across this country right now.  Many of these voices are those of young people, and teens today are more empowered than ever before to create change and make their voices heard.  As a result, there has been a remarkable increase in books for, by, and about teens that explore the topics that so profoundly affect them and show how powerful their voices can be.  Here are just a few recent titles:

Glimmer of Hope: How Tragedy Sparked a Movement by the founders of March for Our Lives
It’s been less than a year since the Marjory Stoneman Douglas High School shooting in Parkland, Florida, but the students who survived the tragedy swiftly moved into action. Within weeks after the shooting, the survivors organized a student-led demonstration in Washington, DC to campaign for stricter gun control laws.  This collection of writings from those students shows how powerful youth voice can be. END_OF_DOCUMENT_TOKEN_TO_BE_REPLACED