Last week I highlighted some of the diverse podcasts the library has to offer on it’s website with no library card required. I wanted to discuss some of the other things offered on the Library Podcast page, specifically the variety of discussions on Seattle and Seattle history. 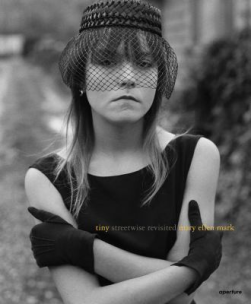 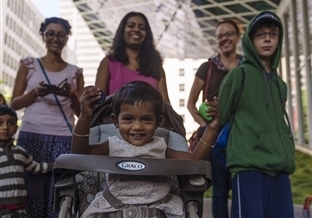 In Fall of 2019, the Library hosted discussions on the hidden history of the Space Needle, including Space Needle Redux: Knute Berger and B.J. Bullert Eye the Needle. END_OF_DOCUMENT_TOKEN_TO_BE_REPLACED 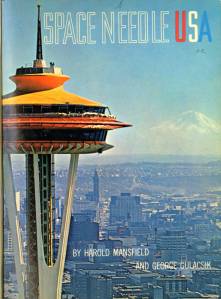 How many times have you gauged your location or some necessary distance by that 605 foot spinning top of a landmark? Long after March 1962, the centerpiece of Seattle Center has evolved just as the campus it towers over continues to morph and change with the ever-growing city surrounding it.

The future is here! Built in record time, the Space Needle went from being a doodle of an idea, on a napkin, to an iconic landmark. Once the largest structure west of the Mississippi, the Space Needle is now dwarfed by buildings that soar over the 605 foot tower. END_OF_DOCUMENT_TOKEN_TO_BE_REPLACED

Fifty-five years ago this month, construction began on one of Seattle’ s most prominent icons – the Space Needle.  Our newest digital collection, the George Gulacsik Photograph Collection, documents the construction of the Needle from its start on April 17, 1961 to its completion in 1962 with the opening of the World’s Fair. END_OF_DOCUMENT_TOKEN_TO_BE_REPLACED 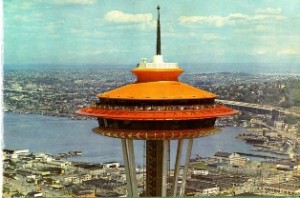 The Century 21 Exposition (or Seattle World’s Fair) took place in Seattle from April 21 to October 21, 1962. The first major American world’s fair after World War II, it presented an optimistic vision of a future improved through science and technology, and promoted Seattle to the world as a space-age city. Exhibits focused on industry, commerce, science, and the future, but also included fine arts, food, and entertainment. Ten million people attended the fair, and it left Seattle with many lasting legacies, including the Space Needle, the Monorail, and the Seattle Center.

In anticipation of the fiftieth anniversary celebrations of the Seattle World’s Fair, we’re pleased to announce the launch of the Century 21 Exposition Digital Collection. This collection contains books, brochures, reports, and other textual documents from the Hugh and Jane Ferguson Seattle Room, as well as 1200 black-and-white photographs of the fair taken by Werner Lenggenhager, documenting construction work, buildings, exhibits, crowds, and events. Together, these items tell the story of the World’s Fair from planning to demolition. 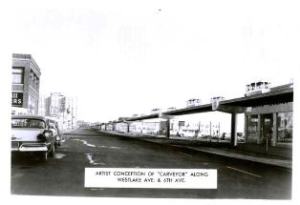 See Elvis filming It Happened at the World’s Fair. Take a tour through the Gayway. Or check out the proposal for the “Carveyor,” an alternative to the Monorail that would have taken passengers between downtown and the fairgrounds in individual cars running on a conveyor belt.

As of this post, over 1000 photos and about 60 textual items are available in the collection. More photos and other items will be added soon!

Visit Thenextfifty.org to learn more about upcoming fiftieth anniversary celebrations. And join us on August 18 at Roy Street Coffee and Tea to take a sneak peek at KCTS 9’s Century 21 documentary, and to handle fair artifacts from MOHAI’s education collection. Visit our Meetup page for more information and to RSVP.