Just because a show only lasts a single season is no reason to think it is a bad show. Yes, yes, I know, most WERE bad and were thankfully put out of our misery quickly, but some were tossed by the wayside merely due to the way the TV industry machine works. Here are a few of those gems in the library’s collection that you may want to take a look at.

Back in the 1970s NBC ran an anthology series that collected several shows under the banner of the NBC Mystery Movie. It included shows like Columbo and Banacek which were longer format shows (90-120 minutes each) that NBC didn’t think would stand on their own as a scheduled TV series. I loved the show and the intro was great; a dark storm-cloud laden sky, a shadowy figure END_OF_DOCUMENT_TOKEN_TO_BE_REPLACED

I just got hit by a winter cold and it hit me hard…usually I only need a day to recover, but not this time. Went back to work on day three and was miserable. Took another day off hoping to get through it – I spent most of my time away moving from the bed to the couch then back to bed again. I couldn’t even read because I couldn’t concentrate, but I did get a lot of time with the television screen.

Pulled out an old favorite of mine, Across the Universe, starring Jim Sturgess and Evan Rachel Wood. Not only does it have one of the best soundtracks, but just the visual effects and story are so beautifully done. It does a remarkable job of bringing The Beatles lyrics to life and creating a story of its time. END_OF_DOCUMENT_TOKEN_TO_BE_REPLACED

Are you an Anglophile who just can’t get enough period drama, droll humor, gray skies or visions of the British countryside? If this describes you, then check out these dozen new television programs and miniseries from BBC, ITV, Channel 4, and Acorn that have recently made their way to DVD. END_OF_DOCUMENT_TOKEN_TO_BE_REPLACED

Because I could not stop for Death, He kindly stopped for me.

The Carriage held but just ourselves And Immortality.

A Dirty Job by Christopher Moore is an edge-of-your-seat read. After seeing a man in mint green at his wife’s hospital bedside – a man he shouldn’t be able to see – Charlie Asher’s life goes from ho-hum normal to utter insanity. Recruited to be Death, Charlie must juggle raising his daughter, hearing voices coming from the sewers, people dropping dead and raven-like creatures attacking him. The characters are brilliant, the humor is epic and the adventure is one of a kind! END_OF_DOCUMENT_TOKEN_TO_BE_REPLACED

On the 50th anniversary of the Seattle World’s Fair, we look back at that year’s popular books, music, movies and TV shows. This week, what was on TV in 1962. 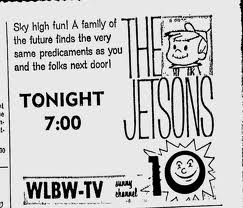 Television looked different in 1962. Nine out of ten American households had TV sets, but they were almost all black & white; Zenith produced its first color set that year. Only a few major TV shows such as Bonanza, The Flintstones and The Jetsons were produced in color at this time. TV was undergoing another big transition as the unpredictable TV comedy of Ernie Kovacs and Sid Caesar were being usurped by pre-recorded sit-coms, and relatively highbrow live dramas (soon to be eulogized as the “golden age” of television) were replaced with filmed anthology shows such as The Twilight Zone and Alfred Hitchcock Presents, both now revered as TV classics themselves. (Of course variety/talk shows were still live: here’s Barbara Streisand on the Gary Moore Show). In 1961, FCC Chairman Newton Minow gave a speech decrying television as a “vast wasteland,” characterized by “a procession of game shows, formula comedies about totally unbelievable families, blood and thunder, mayhem, violence, sadism, murder, western bad men, western good men, private eyes, gangsters, more violence, and cartoons.” It was around this time that TV began to be called “the boob tube.”

“Unbelievable families” were very big in 1962, though they hardly seem unwholesome today. The Beverly Hillbillies premiered this year, and was the year’s highest rated show. The new Dick Van Dyke show also did well, while The Andy Griffith Show had been renewed for a second season and was picking up steam; Barney Fife ushered in 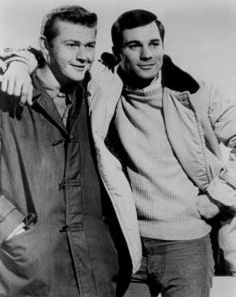 the new year with the first use of his habitual expression “Nip it in the Bud!” Leave it to Beaver was in it’s fifth season and winding down, as Wally got a driver’s license and a steady girlfriend, and the Beaver joined a Rock ‘n Roll record club. Viewers looking for something a bit more hip could head out on the road with clean cut Tod and vaguely Kerouacish Buz as they tooled around the country in their Corvette convertible along Route 66 and other byways, seeking adventure, finding trouble, making things right, and moving on.

In his speech, Newton Minow also referred to the assault of endless “…commercials — many screaming, cajoling, and offending.” That, at least, hasn’t changed. To see more of what we were watching in 1962, check out this list in the library catalog.