Check out these upcoming events with Livewire’s hosts Hameister and Burbank, open mic readings at the Columbia and Ballard Branches, Phillip H. Hoffman, Director of the Alki History Project, discusses the story of the Town of Alki at the Southwest Library, and Ginger Gaffney discusses their memoir.

The free programs listed below are held at a variety of library locations in February; please check our online Author and Books Events calendar for complete details on these featured events and more.

Writers Read
Sunday, February 9 at 2 p.m.
Columbia Branch
Join us for a monthly reading series featuring an open mic and selected author readings from local writers. Local writers will read from their diverse repertoires of poetry, short stories, novels and essays. The event will end with a Q&A session, followed by an open mic session. 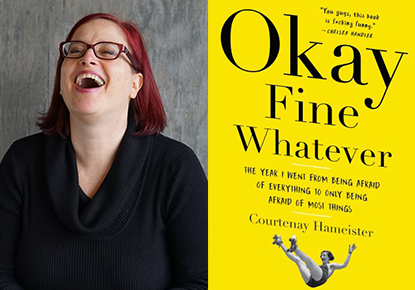 Courtenay Hameister and Luke Burbank talk about ‘Okay Fine Whatever’
Wednesday, February 12 at 7 p.m.
Central Library
Join us to hear Livewire’s hosts Hameister and Burbank talk about Okay Fine Whatever, Hameister’s hilarious account of facing her fears. Refreshing, relatable, and pee-your-pants funny, Okay Fine Whatever is Courtenay’s hold-nothing-back account of her adventures on the front lines of Mere Human Woman vs. Fear, reminding us that even the tiniest amount of bravery is still bravery, and that no matter who you are, it’s possible to fight complacency and become bold, or at least bold-ish, a little at a time. END_OF_DOCUMENT_TOKEN_TO_BE_REPLACED

Roald Dahl’s garden is bright with purple alliums, each
Star-burst blossom bigger than a giant peach.

END_OF_DOCUMENT_TOKEN_TO_BE_REPLACED

Directors who pen their own screenplays are a dime a dozen. The Coen brothers write their own films as do Paul Thomas Anderson, Jia Zhangke, and Jim Jarmusch. And while there are a number of novelists who have tried their hand at directing, from Michael Crichton to Norman Mailer, few filmmakers have done the reverse and written a novel. Today we highlight a few that have.

John Sayles, director of Eight Men Out and Brother from Another Planet, has written a number of books, most recently the tome A Moment in the Sun. The expansive work chronicles American life at the dawn of the 20th century and clocks in at nearly 1000 pages.  END_OF_DOCUMENT_TOKEN_TO_BE_REPLACED

There’s a great list of suggested biographies — Seattle Picks: Biography and Memoir — in our catalog, and most of them are available now or have short holds lists. We selected these six titles with a literary tie-in to feature here.

What I Talk About When I Talk About Running by Haruki Murakami
After selling his jazz bar to embark upon a career as a writer, Murakami, makes long strides in connecting jazz, marathon training and travel to his journey as a writer.

Sophia Tolstoy by Alexandra Popoff
Newly translated letters of the woman who was muse, mate and manager to the celebrated novelist give new meaning to her place, role and significance in Tolstoy’s life.

The Talented Miss Highsmith: The Secret Life and Serious Art of Patricia Highsmith by Joan Schenkar
Psychological suspense novelist Patricia Highsmith had a life as troubled as those of her sinister characters. Schenkar creates a compelling portrait of a strong woman who was an alcoholic, a secret comic book writer, a misanthrope, and a brilliant writer.

Stitches: A Memoir by David Small
In this graphic memoir, the long scar of botched surgeries is a visual reminder of the painful life of a boy who loses his voice then finds inspiration and purpose as an illustrator and author.

Just Kids by Patti Smith
Poet and singer/songwriter Smith writes about her relationship with controversial photographer Robert Mapplethorpe and their years as starving, striving artists in New York in the 1960s and 70s.

A Homemade Life: Stories and Recipes from My Kitchen Table by Mollie Wizenberg
Seattle food writer Wizenberg, author of the popular Orangette blog, has penned a winsome memoir about her father, Paris, her love of food, and romance on the Internet, with scrumptious recipes!