For over a decade, every other Monday at noon listeners have flocked to Thrilling Tales, the Library’s story time for grownups, spending their lunch hour rapt in suspenseful narratives. Janice Leadingham, a local bookseller said in a recent article in City Arts: “Especially for impatient people, it’s good because it slows things down a bit. For one hour, you can just be.” In a recent front page article in The Seattle Times, audience member Zachary Valenter said of Thrilling Tales emcee David Wright, “He’s one of the best storytellers I’ve ever listened to. We come every week that he does the show.” 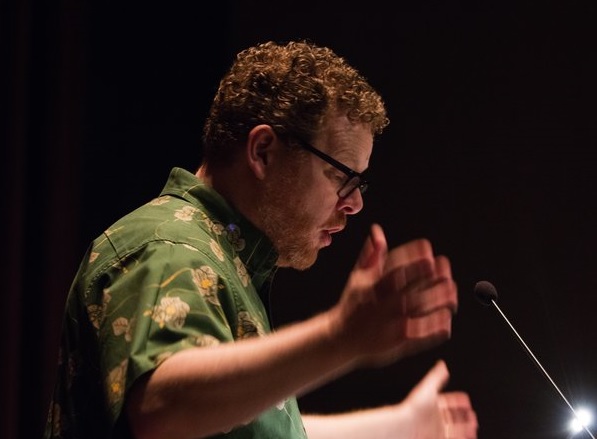 Find out what the fuss is all about: drop by the Central Library at five minutes past noon on any of the following days, and remember just how fun it can be to sit back, relax and let someone else do the reading.

Monday, June 19: When it Changed, by Joanna Russ. After centuries isolated from Earth and a deadly plague, the lost interstellar settlement of Whileaway had survived and flourished. Then came its biggest challenge: visitors from home. From a master of feminist Science Fiction.

Monday, July 3: Dog on a Cow, by Gina Paoli. After picking up the wrong pair of hitchhikers, Dan finds himself at their mercy. But hey – everyone likes to hear a good story, don’t they? Wild, unpredictable thrills.

Monday, July 17: Little Girl Lost, by Richard Matheson. They woke at midnight to the sound of their daughter crying, despite the fact that their daughter wasn’t there. Twilight Zone terror from a master.

Monday, July 31: A Death, by Stephen King. A little girl is killed, and frontier justice fastens onto moronic Jim Trusdale as the killer, but Sheriff Barclay isn’t so sure they’ve got their man. The king of horror tries his hand at gritty western noir.