Seattle Repertory Theatre presents KING CHARLES III by Mike Bartlett from November 11 to December 11, 2016. Librarians at Seattle Public Library created this list of books and DVDs to enhance your experience of the show: Seattle Rep’s KING CHARLES III: Beyond the Theatre 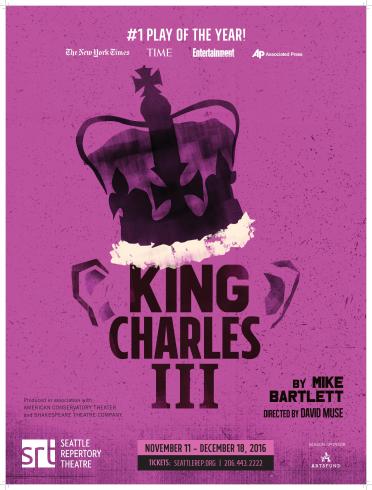 Singular in his distinction of being a king-in-waiting, the Prince of Wales, has waited to ascend to the throne longer than any other in the history of the British monarchy.

In his play, King Charles III: A Future History Play, playwright Mike Bartlett, takes the situation in hand by fast-forwarding us into an imaginary future where, at last, the prince is king.

Of all the kingly difficulties his majesty might face, Bartlett hands King Charles III a key dilemma of our time. In an age of fluidity, of knowledge rife with leaks, sudden slippage and pools of disclosures, where monsoons of minutia consume our attention and floods of fact and fiction endlessly overflow, what is the public, truly, entitled to know? What is the role and responsibility of the media in disclosing information and/or sensation to the public?

Witty, with shades of Shakespeare, actors spin lines of blank verse, insert themselves within and without palace walls, portraying a future in which the present is past. Go figure!  How must the royal family grapple with an odd interplay in which their lives have been scripted, words put in their mouths and bodies that embody their bodies strut across a stage before they’ve even had a chance to live them?

Find out for yourself by going to see the Rep’s production of this well-received play or reading it for yourself. Either way, consider taking the time to delve into the thorny issues that the play presents, issues that each of us grapple with, kingdoms notwithstanding.  Take privacy or the lack thereof.  You could begin with Privacy: A Very Short Introduction and, then, ponder how privacy is related to Loyalty: The Vexing Virtue.  Which would you be more loyal to, the near future, the far past or this day?

Every day, the role and reach of the law is news. The News: A User’s Manual may provide insight and clarity into this ever complex medium that continues to change before our eyes yet remain, stubbornly, familiar.

In all the roles he is called, or will be called, upon to play, prince, father, son, husband and king, a king must be one resourceful fellow. Scripted or unscripted, he is part of a long line of royal personages who have survived and retained power for centuries. Here, finally, the long-awaited role is his for the taking.

You, too, can be resourceful in getting a head start on the part you, as audience member or reader, can play in this dramatic effort. Check out  resource list, created, specially, to accompany The Seattle Repertory Theatre’s production.  You will find books and a couple of DVDs especially selected to increase your understanding of the complexity of ideas Bartlett drew upon in the development of his future history play.  The future is yours!

One thought on “Seattle Rep’s KING CHARLES III: Beyond the Theatre”