Every year, we look for the best books written for young adults. We all have our personal favorites, of course, but there are inevitably a handful of books that rise to the top. This year, our collective favorite titles cover an impressively wide range of timely and important topics, from immigration and criminal justice to racial equity and activism. We also found this year’s books are drawn from just about every genre, including romance, magical realism, survival, science-fiction, and realistic fiction.  Note: MS denotes books appropriate for middle grade readers. 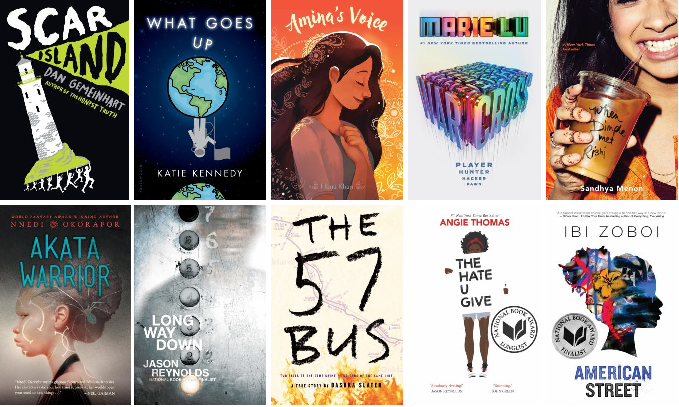 Scar Island by Dan Gemeinhart – Twelve-year-old Jonathan Grisby has been sent to the Slabhenge Reformatory School for Troubled Boys, a former lunatic asylum. When a lightning strike kills all the adults the boys find themselves suddenly free– and trapped on Scar Island.  MS

What Goes Up by Katie Kennedy – Teens Rosa and Eddie, trainees in a top secret space exploration program, must thwart the aliens’ Earth-destroying mission by stealing their spacecraft and traveling to an alternate Earth. MS

Amina’s Voice by Hena Khan – A Pakistani-American Muslim girl struggles to stay true to her family’s vibrant culture while also blending in at school in the wake of a community tragedy. MS

Warcross by Marie Lu– A teen hacker and bounty hunter who tracks down rule breakers of a popular alternate-reality game accidentally glitches herself into a championship tournament, where she becomes an overnight sensation before being recruited as a spy.

When Dimple Met Rishi by Sandhya Menon – A romantic comedy told from the perspectives of two Indian-American teens whose parents have arranged their marriage. One tries to distance herself; the other to woo his intended during a summer program they are attending together.

Akata Warrior by Nnedi Okorafor – The sequel to Akata Witch finds a marginalized but increasingly powerful Sunny chosen to lead a dangerous mission to stop an apocalyptic plot by the terrifying masquerade, Ekwensu.

Long Way Down by Jason Reynolds – As Will, fifteen, sets out to avenge his brother Shawn’s fatal shooting, seven ghosts who knew Shawn board the elevator and reveal truths Will needs to know. Novel in verse.

The 57 Bus by Dashka Slater – In 2013 Sasha, an agender teen, was set on fire while riding the 57 bus through Oakland, CA. This book contextualizes and humanizes both teenagers involved. Nonfiction

The Hate U Give by Angie Thomas– Caught between her poor neighborhood and her fancy prep school, sixteen-year-old Starr Carter becomes the focus of intimidation and more after witnessing the fatal shooting of her childhood best friend, Khalil, by a police officer.

American Street by Ibi Aanu Zoboi – Separated from her detained mother after moving from Haiti to America, Fabiola struggles to navigate the home of her loud cousins, a new school on Detroit’s gritty west side, and a surprising new romance.